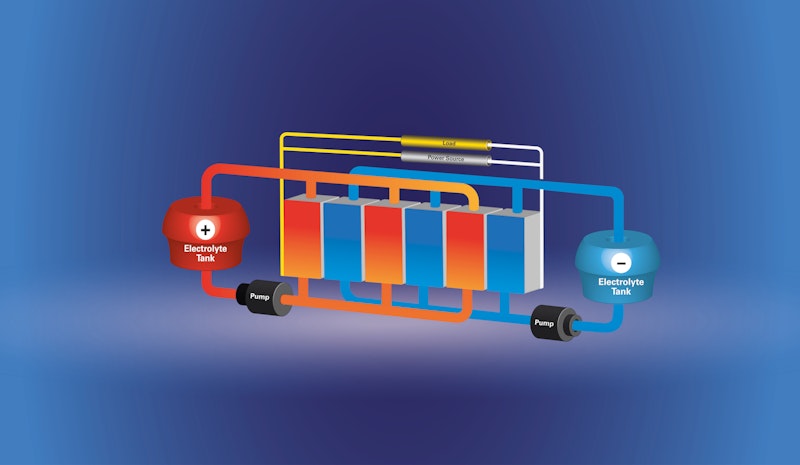 The redox flow battery market is growing. After more than 40 years of research, and 20 years of testing and demonstration projects, the flow batteries are now technologically ready to compete on the energy storage market. With a forecasted CAGR of 30% in the next years, this technology is looking to have all the characteristics to address each segment of the energy storage market, from residential to grid scale application.
In fact, the high safety level and the ease to recycle each component of a flow battery, make this technology very promising in large scale applications, and in a futuristic circular economy.
From several interviews performed by IDTechEx, became clear that an increasing number of companies are getting involved in redox flow batteries, from OEMs to mining companies. Moreover, several countries showed their interest in adopting this technology for electricity grid stabilization. The European Union have funded several demonstration projects; the Chinese government announced the installations of several MWh of flow batteries, and many other countries like South Africa, Korea, and Australia are also getting more, and more involved in this market.
With the report on "Redox Flow Battery 2020-2030: Forecast, Challenges, Opportunities", IDTechEx is addressing all the advantages and drawbacks of redox flow batteries, showing how, and why these technologies will capture in the next ten to twenty years their share of the energy storage market.
While the market is currently under the hegemony of the Li-ion battery technology, the forecast developed by IDTechEx shows the begin of the Li-ion battery decline in the energy storage sector, in favour of the largely available Vanadium redox flow battery (VRFB), besides others.
VRFBs are one of the most studied technologies, thanks to the worked performed by scientist of the calibre of Maria Skillas-Kazacos and Jens Noack (to mention a few) over the last 40 years. Because of the high vanadium electrolyte cost ($25/kg), and other technical limits, other flow batteries chemistry, like All-iron, Organic, Zinc/Bromine, and Hydrogen/Bromine, are promising to be present on the market in the next future.
In the report are emphasised the main advantages and drawbacks of each technology, letting the reader understand and evaluate each type of flow battery. Moreover, an explanation of the main phenomena affecting the performance of RFBs, such as low round-trip efficiency and degradation processes are provided.