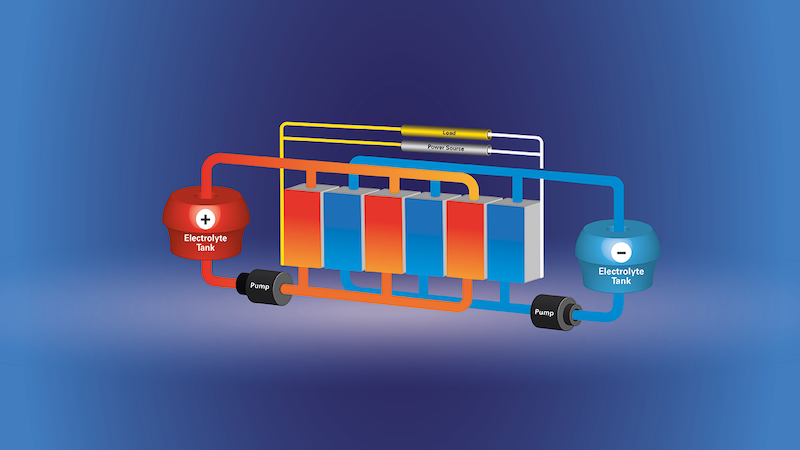 The Li-ion batteries are dominating the stationary energy storage sector, and a growing number of companies are developing different types of technologies to be competitive in the near future in the different segments of the energy storage market. Among the Li-ion batteries competitors, the Redox Flow Battery (RFB) system is one of the main competitors currently approaching the market.
IDTechEx performed an in-depth analysis about redox flow batteries from a technical and market aspect, evaluating their potential to address the evolving stationary energy storage market.
While it's clear that Li-ion batteries will dominate the scene for the time being, this promising competitor has already shown its capability to gain its portion of the energy storage market, pushing the ES industry toward new horizons.
The redox flow batteries working principle is based on flowing two liquids, the electrolytes, across the electrode. In this way, the electroactive species contained in the electrolyte react on the electrode surface generating electricity. Therefore, the larger the amount of electrolyte, the bigger the amount of energy stored in the battery, while the power output of an RFB is defined by the size of the electrode stack and the kinetics of the chemical reaction.
Therefore, a further advantage of redox flow batteries compared to Li-ion batteries is provided by the decoupled energy and power capacity, which allows bigger customization of this kind of system. 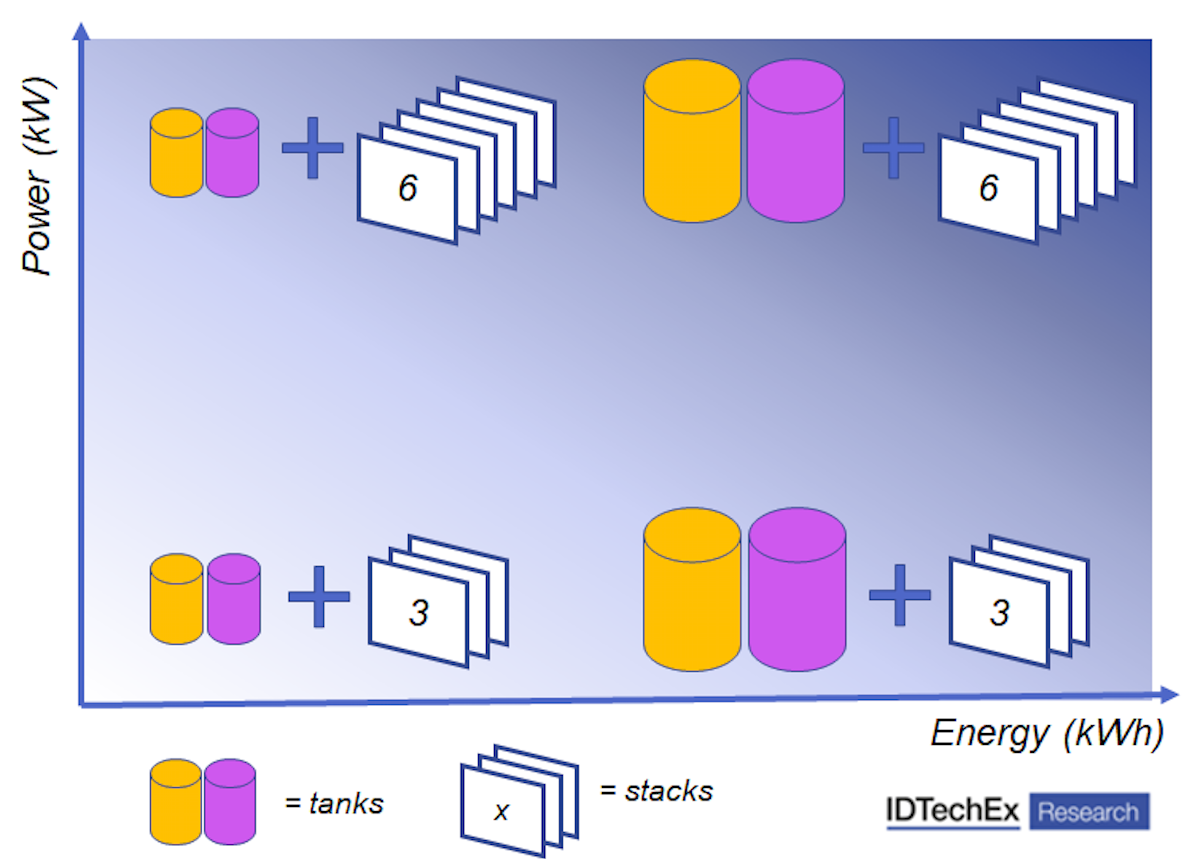 Source: IDTechEx
Over the years, different types of electroactive species have been investigated to increase the efficiency of these systems. The first and most used Redox Flow Battery chemistry is the Vanadium redox flow battery. Initially studied by NASA, and further developed in the 1980's by the research group led by Maria Skyllas-Kazacos at New South Wales in Australia, the Vanadium redox flow battery (VRFB) is today the most studied and manufactured technology within the redox flow battery technology. Besides different types of RFBs, the vanadium technology (and similarly the All-Iron RFB) employs the same electroactive species (vanadium) in both electrolytes, with different oxidation states.
The low round-trip efficiency and the high cost of vanadium (directly affecting the cost of the entire system) are two of the main VRFBs' drawbacks. The electrolyte alone accounts for ca.30% to 40% of the overall technology cost. To reduce the effect of vanadium cost on the overall system, an increasing number of companies started collaborations with vanadium mining companies.
Besides RFB manufacturers, some mining companies themselves are also interested in the VRFB technology. This is the case for the South African mining company Bushveld Minerals. Bushveld Minerals is, in fact, actively promoting the adoption of vanadium flow batteries all over Africa. Outside of the African countries, Bushveld backed the merge between two VRFBs manufacturers (the English redT and the American Avalon Battery), and in 2019 announced its participation in the purchase of a consistent share of Enerox-CellCube, previously known as Gildemeister AG.
Although Vanadium technology dominated the flow battery scenario over the last few years, a growing number of other redox flow batteries are populating the market.

Besides the Vanadium flow batteries, the zinc-bromine technology is the second in the rank of adopted technologies.
Technically different from a VRFB, the ZBB is based on a solid zinc electrode and a liquid bromine electrolyte, which gives this technology a higher energy density than VRFBs.
With the Australian Redflow, and the America Primus power dominating the scenario, this technology is slowly (but not too slowly) acquiring its share of the flow battery market.

Developed by the American company ESS Inc., the promising all-iron RFB is characterized by the use of iron as electroactive species in both electrolytes (catholyte and anolyte). The low-cost iron-electrolyte brings a large advantage in terms of cost, although other limitations, such as hydrogen evolution, affect these kinds of batteries.

Already on the scene for a few years, the hydrogen-bromine flow battery is one of the future redox flow batteries approaching the market. The Dutch company Elestor is behind the development of this technology, which in 2019 received a multi-million investment from the Dutch conglomerate Koolen Industries, in addition to the EIT Innoenergy, already an early investor in Elestor. Moreover, the company is involved in the European MELODY project, related to the development of a sustainable redox flow battery technology that can effectively reduce the costs of electricity storage to support large-scale.
The development of new redox flow battery chemistries has the main target of decreasing the capital cost of the technology, making these systems more appealing for the stationary energy storage market. The young and fast-growing stationary energy storage market is pointing towards large storage time targeting the 4 hours of storage and above. While a Li-ion battery system is clearly capable of addressing this storage time, longer storage times simply mean a different type of market addressed, where Li-ion battery systems may step out from their cost-effectiveness, hence making redox flow battery and other technology more competitive.
IDTechEx has performed an in-depth analysis of Redox Flow Batteries from a technical and market aspect to understand the current status of development of the redox flow batteries and their possibilities to address the market demand.
The results of IDTechEx analysis have been published in the report titled: "Redox Flow Battery 2020-2030: Forecast, Challenges, Opportunities", showing a CAGR of 30% in the next 10 years, pushed by the large interest in energy storage systems, to support the electricity grid. 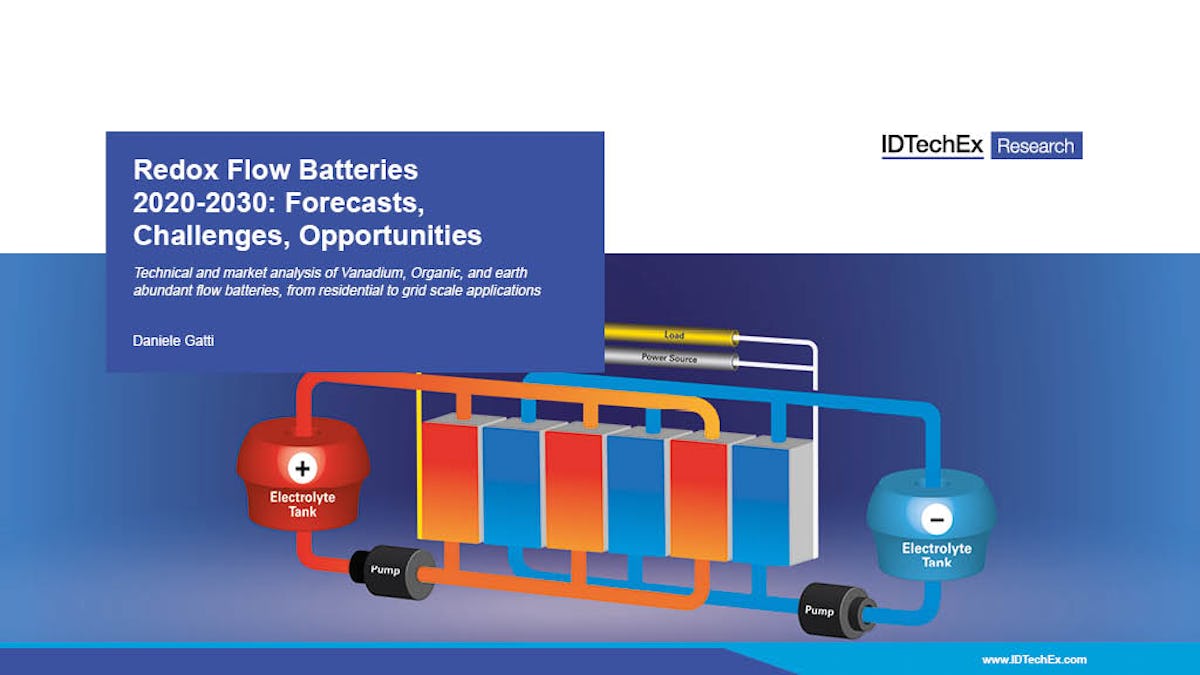 Front cover of IDTechEx's Redox Flow Battery Report
Redox flow batteries are expected to be the direct competitor of Li-ion batteries for stationary energy storage applications for front-of-meter and maybe in the future also for behind-the-meter applications. In fact, from the analysis conducted by IDTechEx, a considerable amount of companies manufacturing RFBs are developing large-scale systems for Front-of-Meter applications, while a smaller amount of companies are addressing the Behind-the-Meter segments.
Besides the fast-growing market, the larger storage time segment addressed by this technology is yet to come, making these systems more profitable in the next few years.
For more information on this report, please visit www.IDTechEx.com/redox, or for the full portfolio of Energy Storage research available from IDTechEx please visit www.IDTechEx.com/Research/ES.
IDTechEx guides your strategic business decisions through its Research, Subscription and Consultancy products, helping you profit from emerging technologies. For more information, contact research@IDTechEx.com or visit www.IDTechEx.com.