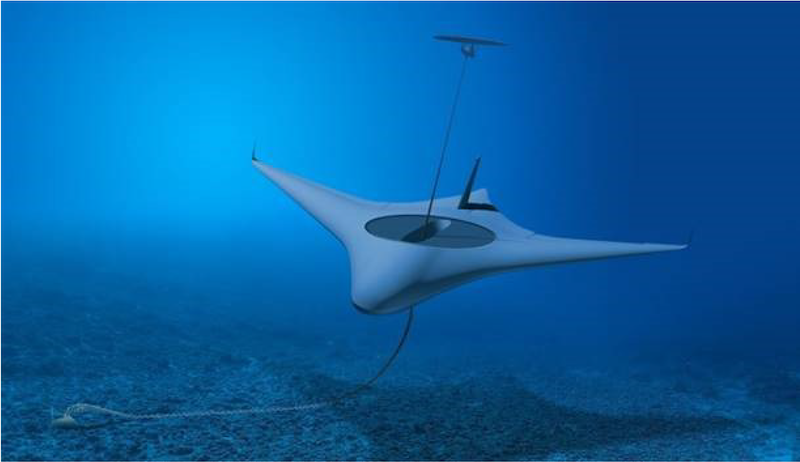 The IDTechEx report, "Thermoelectric Energy Harvesting and Sensing 2020-2030", shows how remarkable new applications are driving the increase in interest in thermoelectric power generation. The Matrix smartwatch is one but here is something completely different.
Unmanned underwater vehicles UUV are unmanned electric craft that carry out a host of tasks from inspecting oil rigs and whale populations to seafloor prospecting for minerals. They divide into swimmers and gliders. Swimmers look like torpedoes. They are charged, sometimes underwater, then they go a few kilometers doing their tasks such as emergency rescue. Gliders are designed to last much longer, some being like hinged surfboards that surface to recharge using sun and waves when necessary. They criss-cross the Pacific Ocean, for example, but only manage one or two knots speed. Manta Ray is one that has appeared from Scotland to Australia, being used for long-range anti-submarine patrols and other more clandestine missions. Can it last even longer with thermoelectric power?
In February 2021, The US agency DARPA awarded contracts to Northrop Grumman Systems Corporation and Martin Defense Group (formerly Navatek) to build demonstration versions of the new Manta Ray unmanned underwater vehicle. They also awarded a separate contract to Metron for Manta Ray's most important feature: an energy-harvesting system to power it indefinitely, allowing the robot submarine to carry out missions lasting months or years without returning to base or refueling. Thermal rise-and-glide methods exist but going in a straight line thermoelectrically is also on the table. Appropriate thermoelectric modules were recently demonstrated by researchers from the University of Glasgow in Scotland. These use the temperature difference between different parts of the vehicle to produce a small but significant electric current - enough, the researchers say, to power an unmanned underwater vehicle. Boeing, which is building the Navy's Orca unmanned submarine, is active in this area.
Another option is underwater kites exploiting different currents and various depths, but multiple solutions, including thermoelectric, are on the cards meaning no one winner is a possible result. Either way, it should transform the field of underwater warfare. A large, manned, nuclear-powered submarine may not be needed to maintain a permanent presence in disputed waters. Think shoals of lurking Manta Rays.
"Manta Ray performers have each taken unique approaches to solving the wide range of challenges related to UUV endurance," program manager Commander Kyle Woerner said in the statement that details the latest contracts. "To me, this is a clear sign we are tackling a complex problem without a clear 'one size fits all' solution."
For the big picture of the burgeoning energy harvesting business, see the IDTechEx report, "Energy Harvesting Microwatt to Gigawatt: Opportunities 2020-2040". For the full portfolio of Energy Harvesting & Off Grid research available from IDTechEx, please visit www.IDTechEx.com/Research/OffGrid.
IDTechEx guides your strategic business decisions through its Research, Subscription and Consultancy products, helping you profit from emerging technologies. For more information, contact research@IDTechEx.com or visit www.IDTechEx.com.
Top image source: Manta Ray Unmanned Underwater Vehicle. Source: DARPA