Industrial designers are looking for ways to use the energy of children playing to produce electricity to power park lights and signs and also to power nearby houses.
Designer Theresa Ling has created a proposal for an interactive, educational, airport playground. Her Energy Harvesting Playground is designed to harvest kinetic energy to power an educational interface about energy usage. The proposal was developed from a prototype of an interactive see-saw powered by the kinetic energy of the see-saw's up-and-down motion. A DC motor attached to the pivot point of the see-saw illuminates an LED interface running along the see-saw's planks. 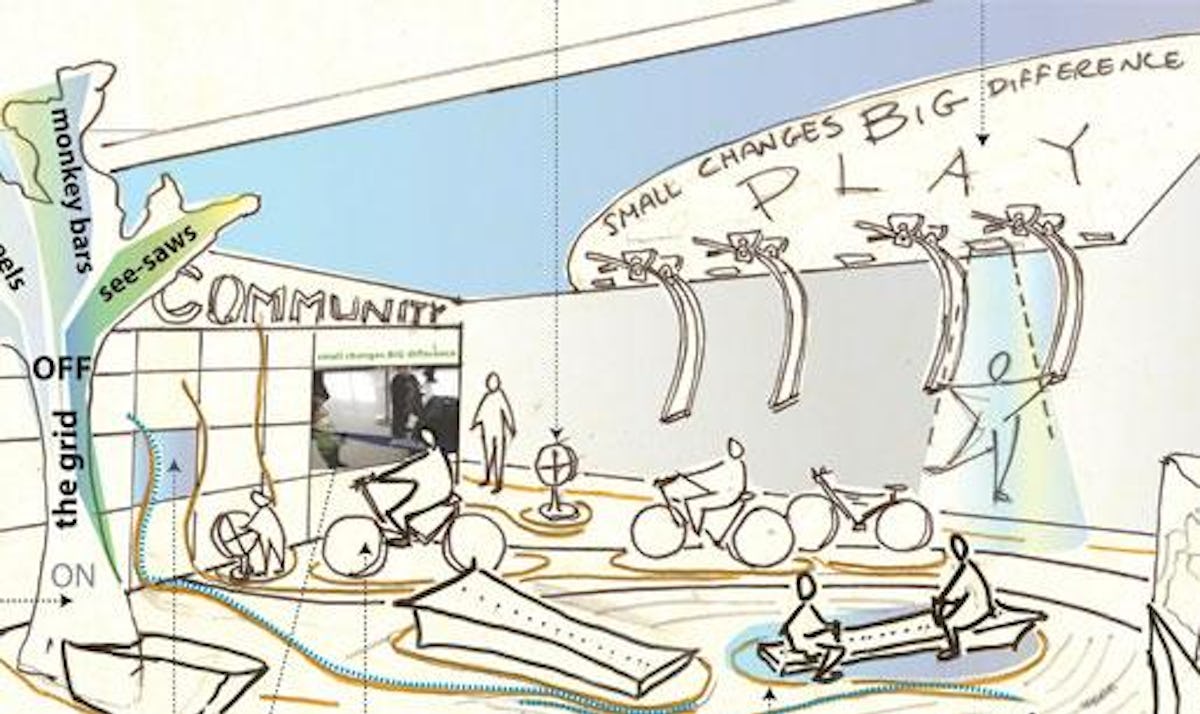 Source: Theresa Ling
The Powerleap Playground, by designer Wendy Uhlman, is a concept that will harness the kinetic energy from children's movements and convert it into electricity to power the playground and also the park lights during the night. 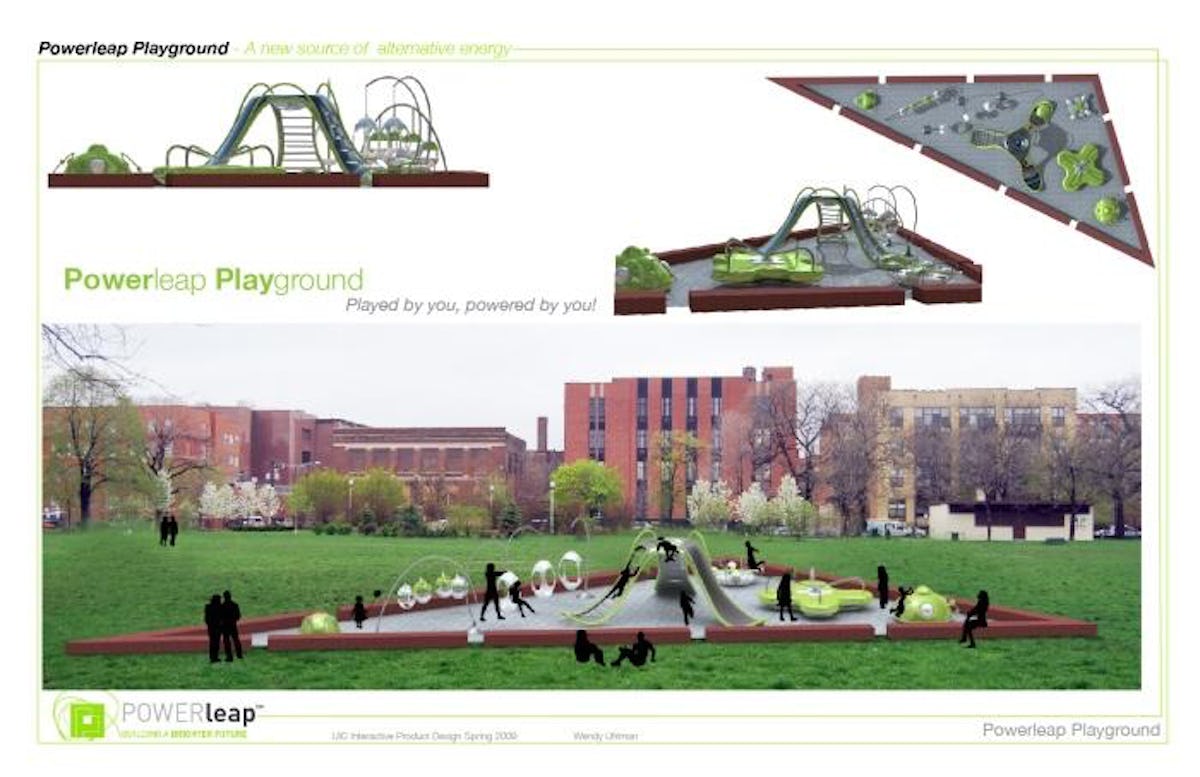 Source: Wendy Uhlman
Designers Ananya Tantia and Erin Knowleton chose an existing site on which to hypothetically place their concept energy harvesting playground. Each component works on a slightly different rotary motor system to capture electricity from rotational motion. As the rotors spin inside the various rides, the magnets inside constantly change polarities from positive to negative creating an electron. For example riding on the aerial merry go round causes the the top blades to start spinning, a rod attached to the top piece moves inside an outer casing. The rod is attached to a gear system which spins a rotor to produce energy. The slides have rollers to help with energy generation and the rocking motion on the seesaw moves a rod running through the center which in turn moves a gear back and forth. Again, electricity is produced. 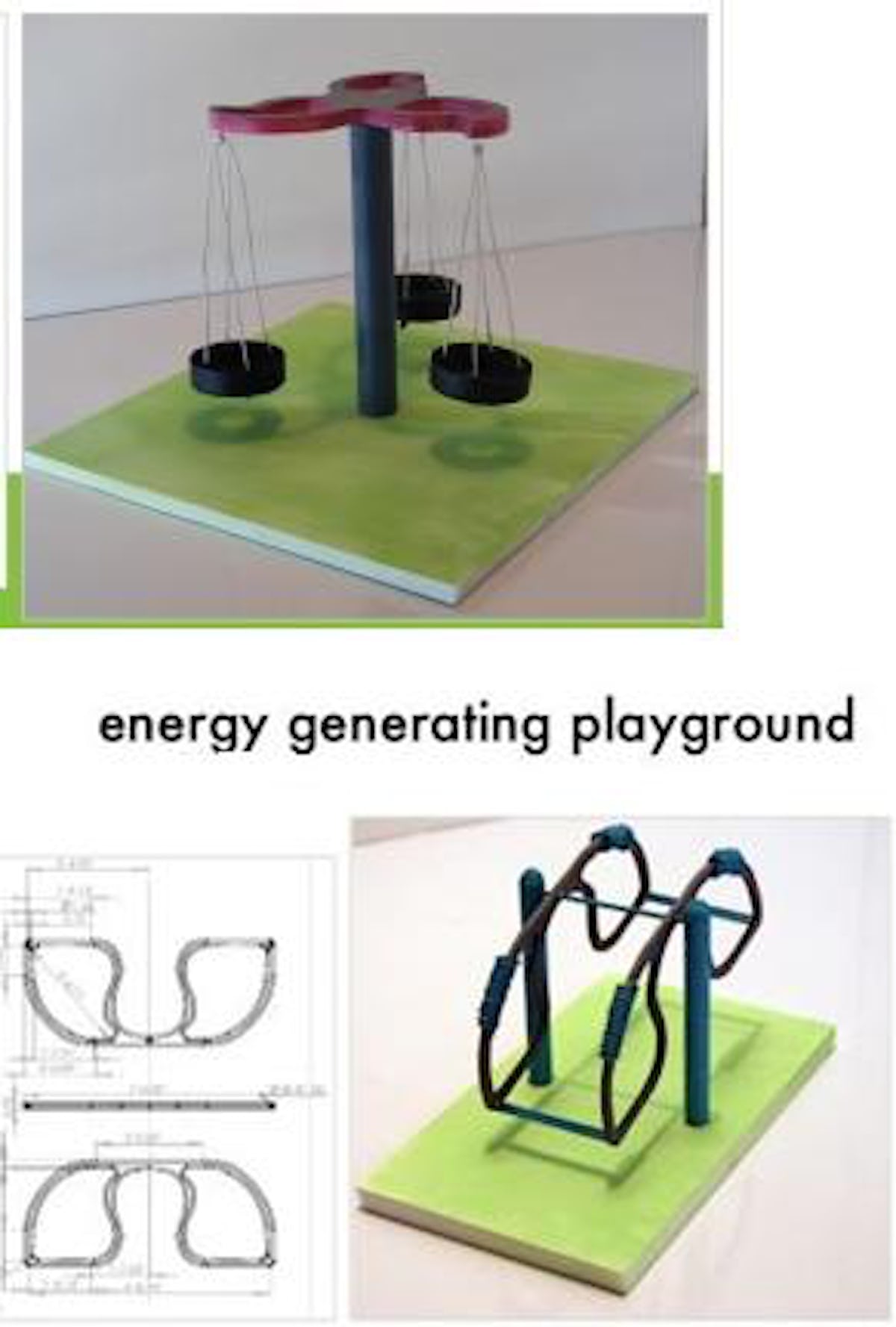 Source: Ananya Tantia
Sweco AB in Sweden has been developing a sustainable playground where pedalling on the bicycle carousel causes soap bubbles appear; jumping on the ground makes a rubber boat inflate and playing on the seesaw powers a film projector to start playing. The playground is aimed at Skogsgläntan preschool which will have a low-energy building. The idea, as far as possible, is to heat the building using natural sources such as the heat radiated by people and equipment and to develop solutions that utilize human energy for additional purposes such as the kinetic energy generated by the children in the playground.
Top image source: Gardner Group
For more read : Energy Harvesting and Storage for Electronic Devices 2010-2020
and attend Energy Harvesting & Storage and Wireless Networks & RTLS Europe 2011

Opportunities for Emerging Thin Film Photovoltaics in 2023 and Beyond
CCUS Market Set for Growth in Key Industries, Finds IDTechEx Report
Webinar With Q&A - Printed/Flexible Electronics: What to Watch in 2023
Materials for PEM Fuel Cells to Exceed a Market Value of US$7 billion