With the last couple of weeks bringing some unsettling news for the photovoltaic industry, especially on large scale solar farm and rooftop installations (the Q-Cells insolvency was the latest hit to an industry that is in the mercy of a price war), once again the question arises: What can new technologies bring to the table and how can they compete?
The IDTechEx reports on energy harvesting (Energy Harvesting and Storage for Electronic Devices 2011-2021), and thin film photovoltaics (Thin Film Photovoltaics and Batteries 2012-2022) are tracking the potential markets for emerging technologies. Slow yet steady growth is predicted for new technologies in photovoltaics over the next few years but also, a vibrant market is being created for energy harvesting in several verticals ranging from the consumer electronics and automotive to the building and industrial equipment sectors.
A look at three start-ups, all with unique positioning and different technology and market approaches gives an idea of where and how emerging solar technologies can compete in this already overcrowded space.

Heliatek is determined to redefine the landscape for organic photovoltaics, the "underdog" that is trying hard to catch up with the leading solar technologies and claim a significant market share in the near future, in applications ranging from portable solar all the way to BIPV and roof top installations. 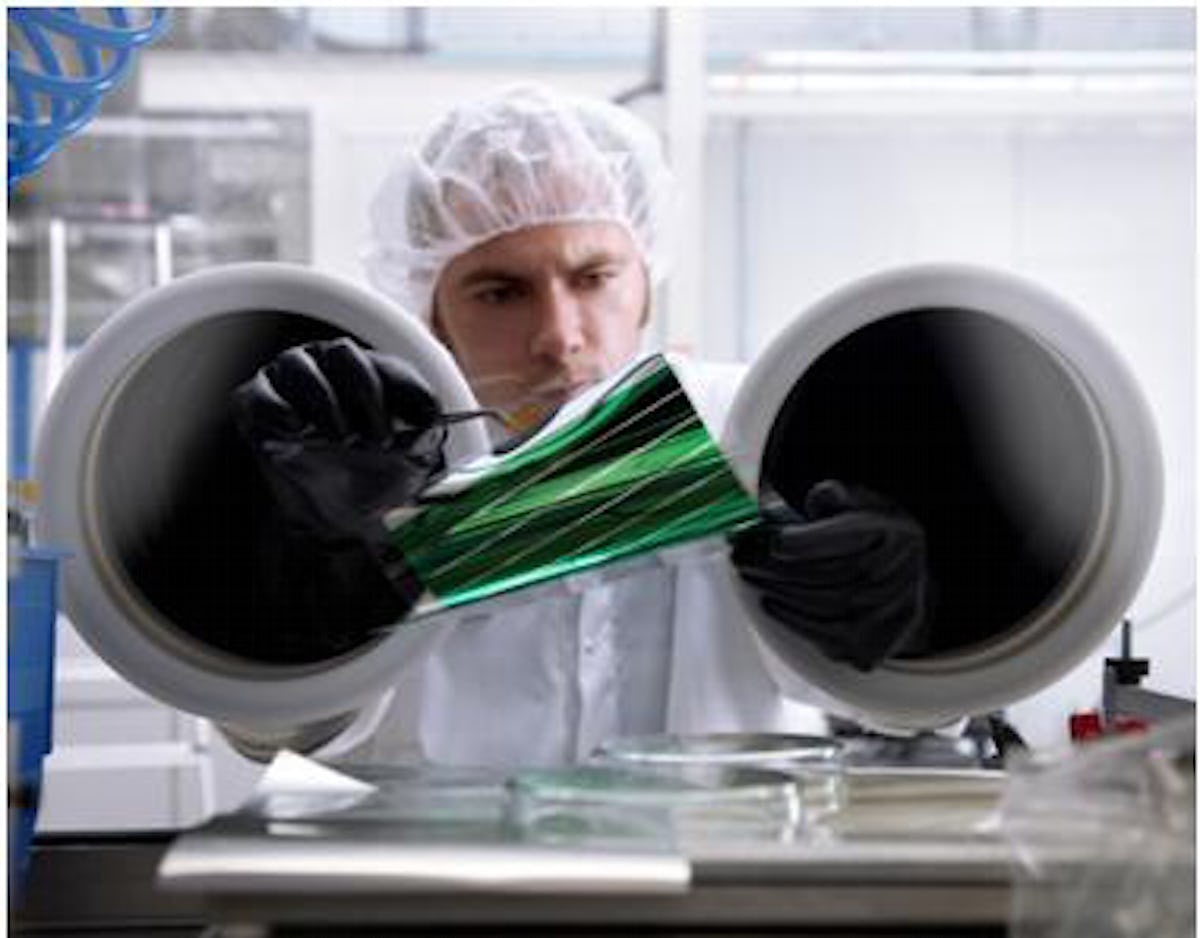 Heliatek flexible solar cell
Heliatek's approach is based on p-i-n tandem cells; the company, through precise optical engineering works on placing the absorber layers in the respective interference maxima. Back in 2009, Heliatek was demonstrating cell efficiencies of about 6% but through a lot of work in optimizing materials, including the development of wideband strong absorbers such as the one showcased below, the company demonstrated at the end of 2011 a solar cell with a certified 9.8% efficiency and is currently in the process of certifying cells which are expected to achieve over 10% efficiency. 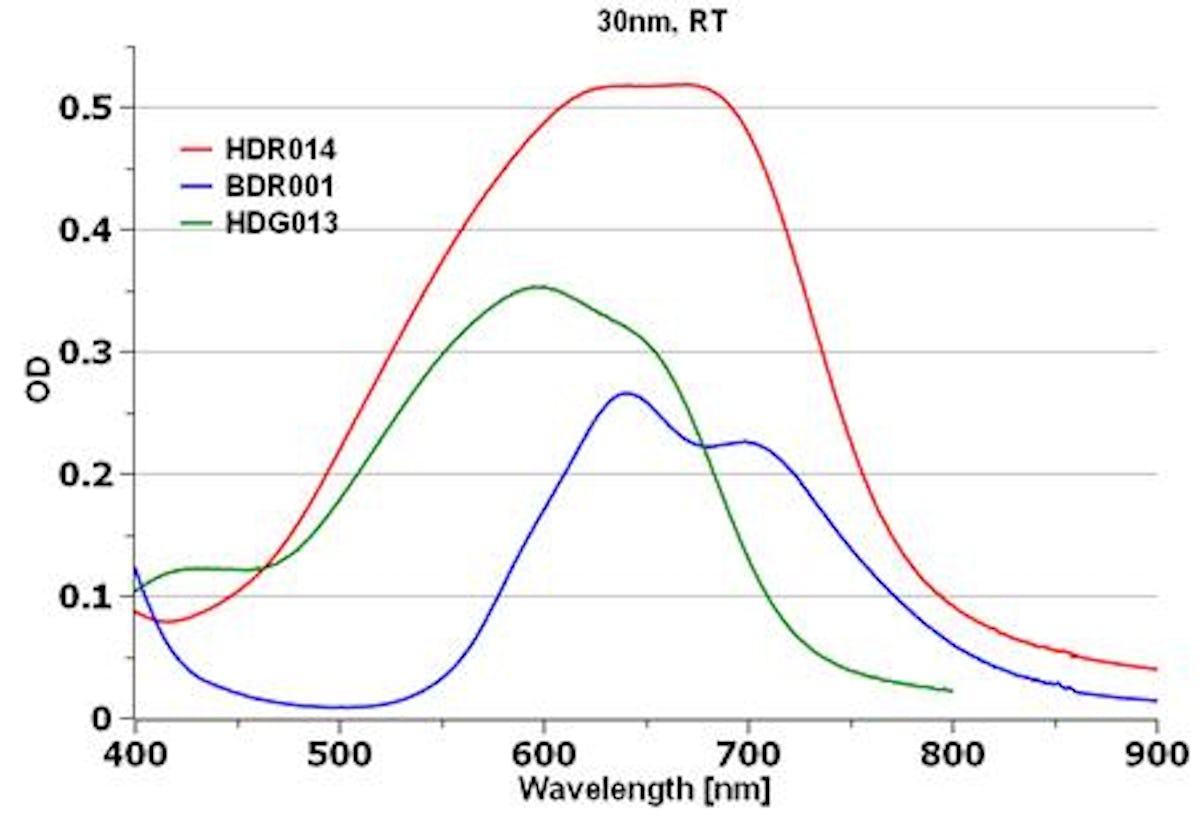 Heliatek broadband absorber with strong absorption characteristics
The company is also progressing in transferring its technology from glass to PET foil as well as working on substituting ITO with other transparent conductors such as Cambrios' silver nanowires, having achieved 8.5% efficiency with those cells.
As a side note, the Heliatek record 9.8% efficiency cell described above included proprietary absorbers developed and synthesized by Heliatek, but also dopants supplied by Dresden start-up Novaled. Dr Steffen Pfuentzer discussing Novaled's strategy pointed out that although the company is mostly known for its OLED active materials technology, it also aims to develop and provide enabling organic materials to key players in organic photovoltaic technologies, whether based on polymer, small molecule or dye sensitized solar cells.

New Energy Technologies' SolarWindow™ generates clean electricity on see-through glass windows, by making use of the energy of natural sunlight and artificial sources such as fluorescent and LED lighting typically installed in offices, schools, and commercial buildings. Under a world-wide licensing agreement with the University of South Florida, covering 10 patent pending applications, together with a Cooperative Research and Development Agreement with the U.S. Department of Energy's NREL —National Renewable Energy Laboratory, the company is developing six products incorporating SolarWindow™ technology: From flat glass products for installation in commercial towers all the way to decorative interior glass walls, room dividers and installations in new residential homes. There are also options for flexible films which may be applied directly on to glass, similar to aftermarket window tint films, for retrofit to existing buildings.
New Energy's power generating solution is unique to SolarWindow™ coatings, which make use of small functional organic solar cells, which measure less than ¼ the size of a grain of rice. They have been shown to successfully produce electricity in a published peer-reviewed study in the Journal of Renewable and Sustainable Energy of the American Institute of Physics. They can be sprayed on to see-through glass using a novel, patent-pending process presented in AZoNano's (peer-reviewed, Journal of Nanotechnology Online; Dec. 20, 2009), "Nanotechnology Thought Leaders" series.
Not requiring expensive high-temperature or high-vacuum production methods, but rather, sprayable on to glass at room temperature and able to generate electricity from both natural and artificial light sources, they could outperform today's commercial solar and thin-film technologies by as much as 10 times according to the company, and all that while measuring less than 1/10th of the thickness of traditional thin films. With an estimated 5 million commercial buildings in America and more than 80 million single detached homes the market opportunity is enormous.

According to Dr Mazhar Bari, CEO of SolarPrint, a developer of dye sensitised solar cells, the company made huge progress in 2011 in turning its core technology into a leading energy harvesting product (to enable wireless sensors) based on customers' needs and specifications. The SolarPrint technology is the most efficient in converting indoor light into electricity to provide sufficient power to enable wireless sensors, such as temperature, humidity, motion, carbon dioxide, light etc. SolarPrint is expecting 2012 to be a customer-focused year. Already in November 2011, at the IDTechEx trade show and conference in Boston on wireless sensors and energy harvesting, SolarPrint and Analog Devices co-presented a fully integrated wireless sensor system demonstration. The company is planning to start shipping prototype product to customers and will continue building performance and cost leadership in light energy harvesting technology for the building energy management industry.

SolarPrint Beta Power management solution. Source: SolarPrint
When it comes to challenges for the company, as Mazhar recently stated in an interview: "We are on track to complete our product development targets in 2012 and continue with building our IP portfolio. Continued process development will be required in order to scale the production to sufficient volume to seed the market."
SolarPrint's technology has the potential to be adopted into various consumer electronic and wireless devices however given its high performance in ambient or diffuse light the company has developed its DSSC to integrate with wireless sensors for energy harvesting purposes in buildings. Wireless energy management systems provide significant cost savings by eliminating wired networks.
When compared to competing photovoltaic technologies, in terms of module power output, DSSC consistently outperforms the a-Si across the indoor light intensity range (e.g. 200-400 Lux in normal office conditions). The characteristics of voltage and current output also differ between DSSC and a-Si since the inherent voltage stability of DSSC allows for simpler power management which results in lower component costs. 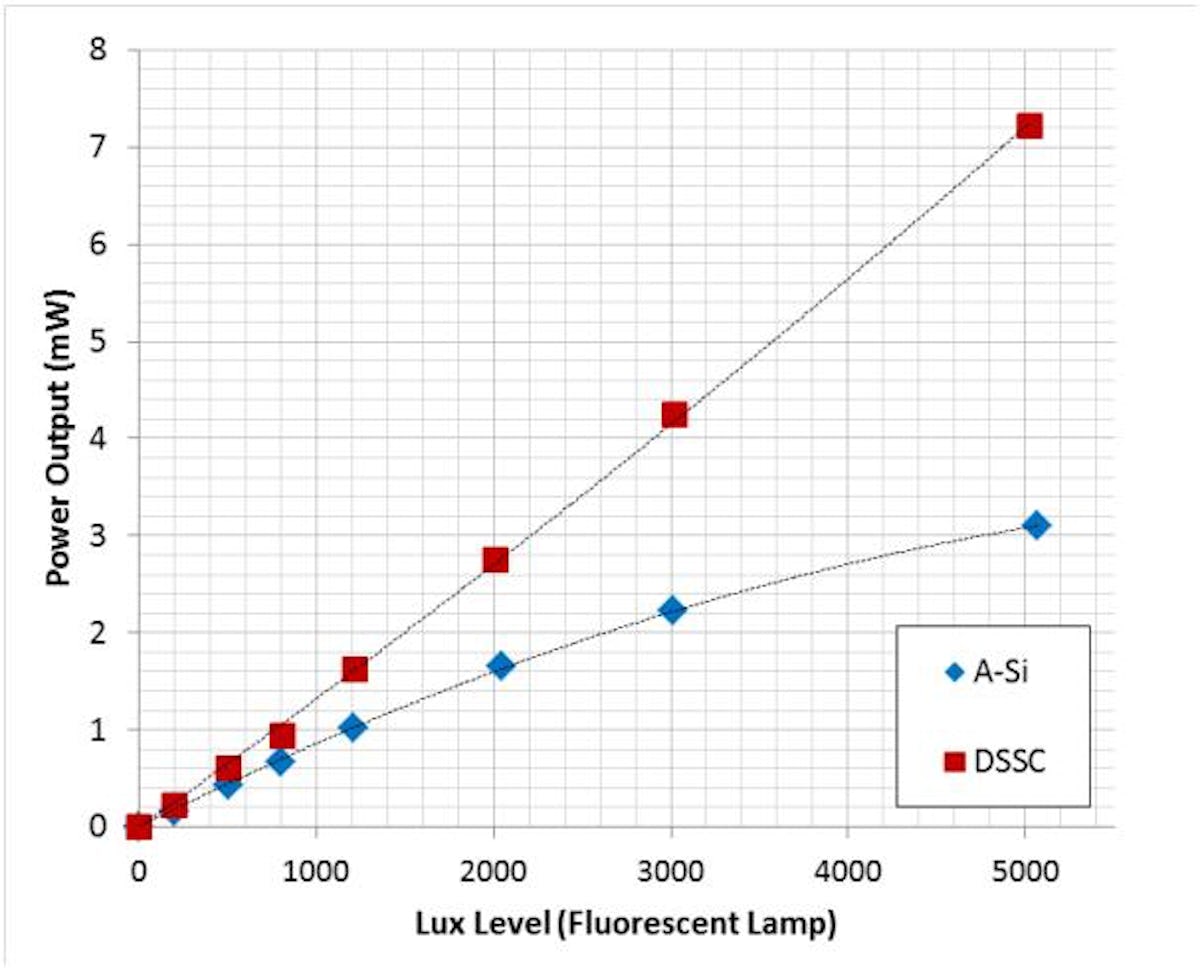 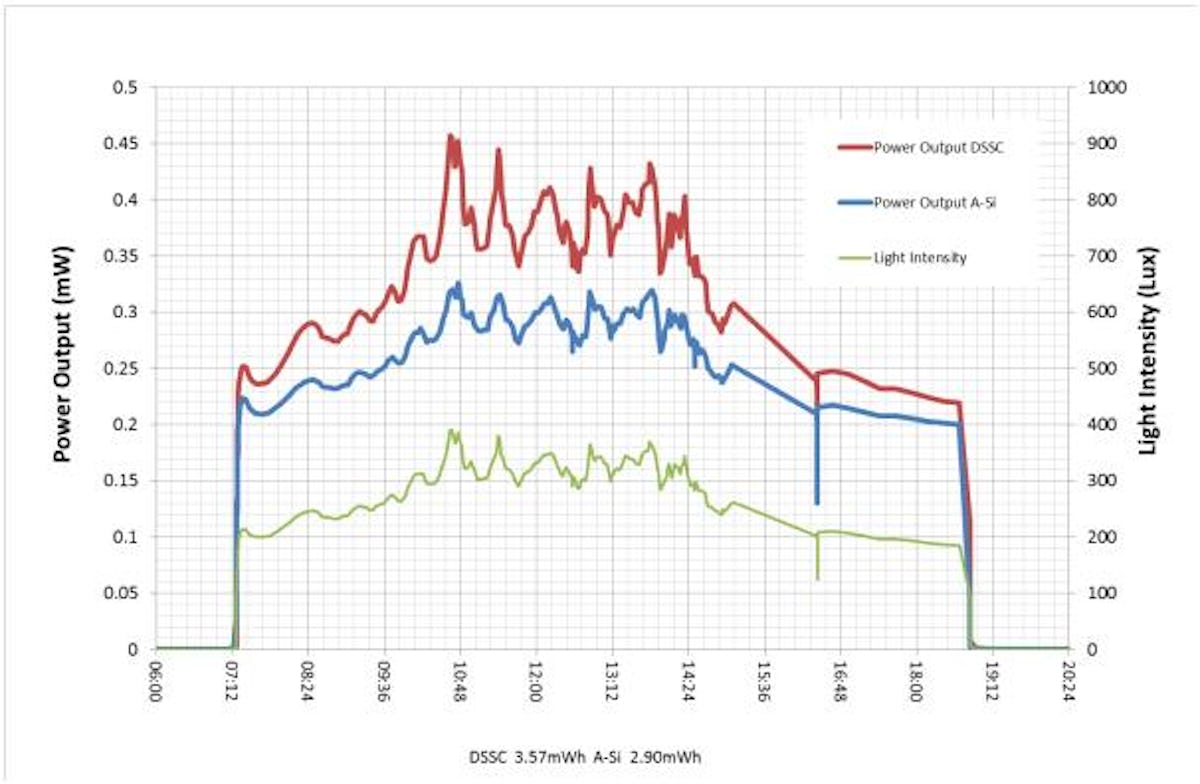