We have just visited Perpetuum, a vibration harvesting company spun off from Southampton University and situated in Southampton UK. Perpetuum has raised about $15 million so far and, with plenty still in the bank, it has no fears of the global financial meltdown. Indeed it has been delivering product for some time and now it has capacity for 60,000 units yearly at its subcontractor.

Having started by looking at piezoelectrics and faced with what it saw as their present day limitations of reliability and sometimes high internal resistance, Perpetuum follows the more proven route of electrodynamic harvesting. There is a long provenance here, from Faraday to the bicycle dynamo, wind-up torches and the ripcord powered One Laptop per Child computers being designed at Massachusetts Institute of Technology for the Third World. Then there are the successful Seiko wristwatches and now electrodynamics is extending its reach to implants in the human body thanks to Perpetuum. Here harvesting a tiny amount of the energy of the human heart drives implanted defibrillators and pacemakers, or such is the intention. This early stage work is funded by the UK Government in collaboration with some of the finest cardiologists in the world at Southampton University Hospital. If successful, it will probably be licensed to a medical device manufacturer.
Proposed energy harvester implanted in a human heart 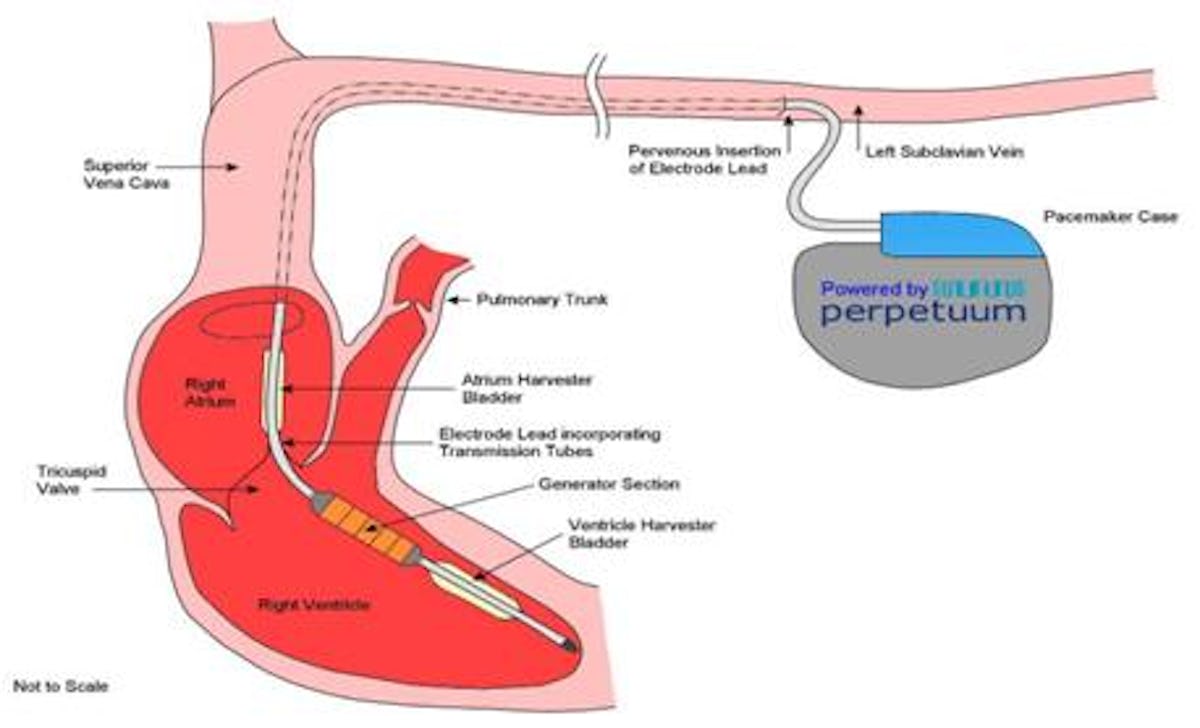 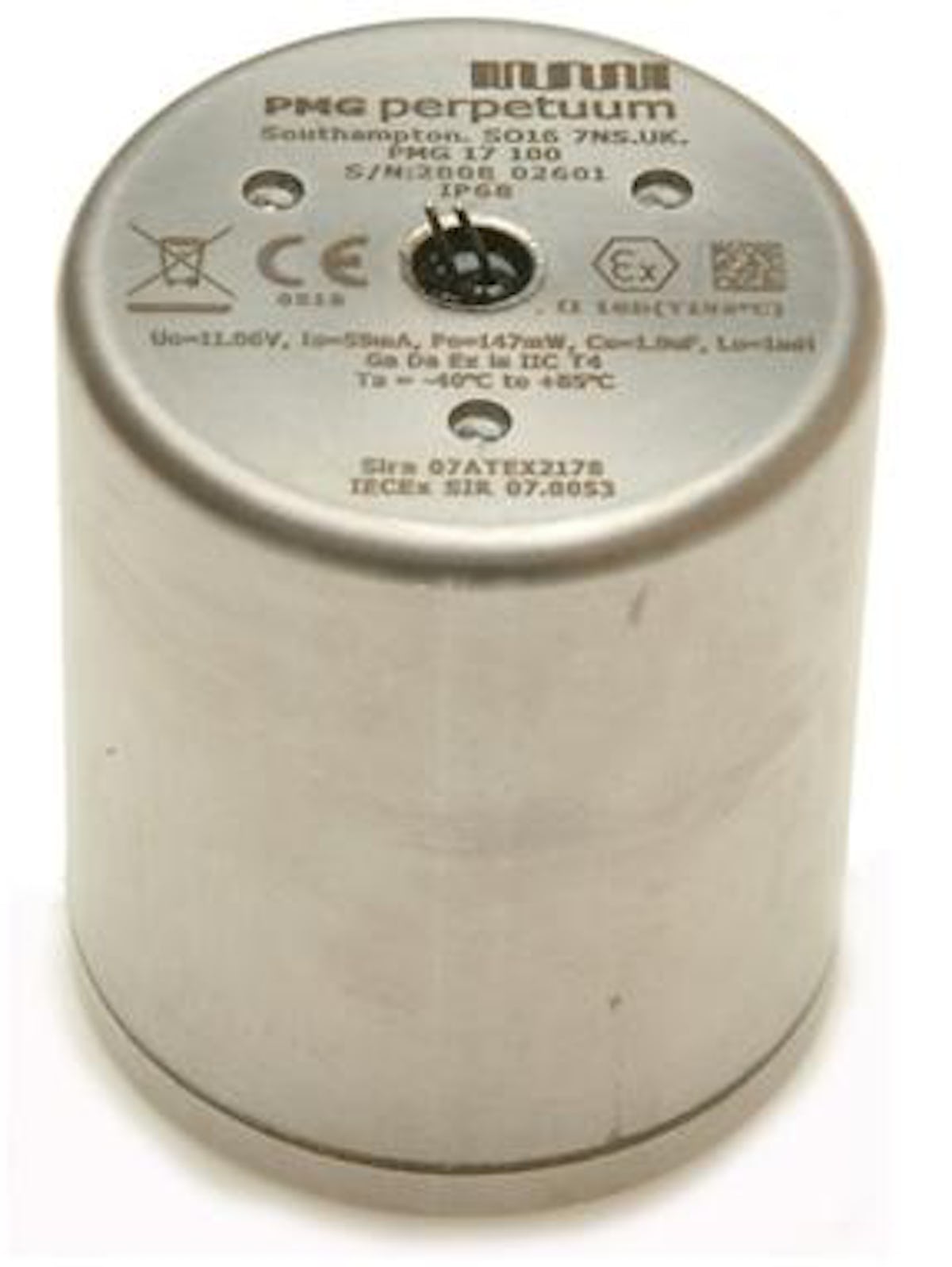 However, the heart of Perpetuum is vibration harvesting with very professionally engineered devices that harvest vibration from machinery, railway wagons, other vehicles, equipment in oil refineries and so on. Indeed they are made to both international quality standards and the highest level of intrinsic safety (ATEX Zone 0)demanded in the oil and gas industry. Particularly important in Perpetuum's addressable market are the ac electric motors that appear just about everywhere. These typically operate at 50 or 60Hz and their more useful vibration peaks at roughly double, so that is where Perpetuum tunes its harvesters. We were shown an impressive demonstration of generating several useful milliwatts from a motor that scarcely seemed to vibrate at all. Bear in mind that there is a rule of thumb that you are not in the mainstream energy harvesting business unless you can generate at least a useful 200 microwatts.

Broad or narrow band as required

Unlike many alternative technologies, Perpetuum harvesters can be made broad band, useful in railway wagons, for example, where there is plenty of energy, and something more like motion harvesting is required. Narrow band is more efficient, and that is provided for the more precise and predictable vibration of electric motors.

CEO Roy Freeland agreed with us that around 90% of potential applications of Wireless Sensor Networks WSN can only be met with energy harvesting because the nodes will be either embedded or otherwise impractical to visit. Apparently one industry executive has said, rather pithily, "We are not replacing meter reading with battery changing."

The sheer variety of potential applications of WSN from monitoring, sea and river condition to body area networks in humans means that all the virtuosity of the nascent energy harvesting industry needs to be brought to bear. Here it was interesting to learn that the Perpetuum broad and narrow band capability will be enhanced by combinations of its technology with other forms of harvesting so one will work when the other does not.
Of course, most of the potential WSN applications call for at least twenty years life and although lithium thionyl chloride LTC single use batteries can achieve this when used in place of energy harvesting, they pack almost the specific energy of TNT explosive and that makes some hesitate to use them in sensitive environments. LTC batteries tend to need capacitors for providing the necessary surges of power. They certainly have a market in non-stop road tolling tags and elsewhere but IDTechEx perceives that much of the WSN business will need to go to energy harvesting.
For example, rechargeable batteries currently used in a lot of WSN tend to last for only thousands of deep recharges and most of them last well under twenty years. Certainly Perpetuum does not use them for load balancing. It finds that supercapacitors do a good job here because they last 20 years, operate at suitable low voltages and have an almost limitless number of recharges in them. Values around 90 millifarads are employed, with two per harvester in the model we were shown. When they are available, so called assymmetric supercapacitors may be useful too. These are a combination of battery and supercapacitor technology and are sometimes painfully called supercabatteries or bacitors but proven, deliverable versions for small devices are not yet available.

Roy Freeland, CEO of Perpetuum puts the potential for his type of vibration harvesting in oil refineries as follows. Operators would ideally like an average of ten wireless sensors (not necessarily WSN) per rotating machine of which there are up to 5000 in a large oil refinery and about 700 appropriate oil refineries in the world. That means that the oil industry has a potential of hundreds of millions of vibration harvesters when we add the potential beyond refining and into distribution, exploration and so on. Indeed, one oil major plans 20 million sensors that will need harvesting. There are, of course, many other industries, such as Chemical, Power and Water Utilities and Transportation that also have high volume requitrements. That said, the electrodynamic approach is so effective that sometimes one harvester can power four sensors. The bottom line seems to be that Perpetuum has an addressable market of at least two billion dollars yearly given that the devices may drop to around $150 each in very high volumes.
Standards body ISA is looking at standards for power sources interfacing to WSNs that will accommodate multiple power sources.
Meanwhile, Perpetuum has its energy harvesters in full use at such locations as driving sensors in Shell's Nyhamma gas terminal in Norway and monitoring bearings in sewage farms (Pruftechnik wireless accelerometers etc.). Usually, a beefy 1-7 mW is generated. Clearly this company has a very exciting future. For more see www.perpetuum.co.uk