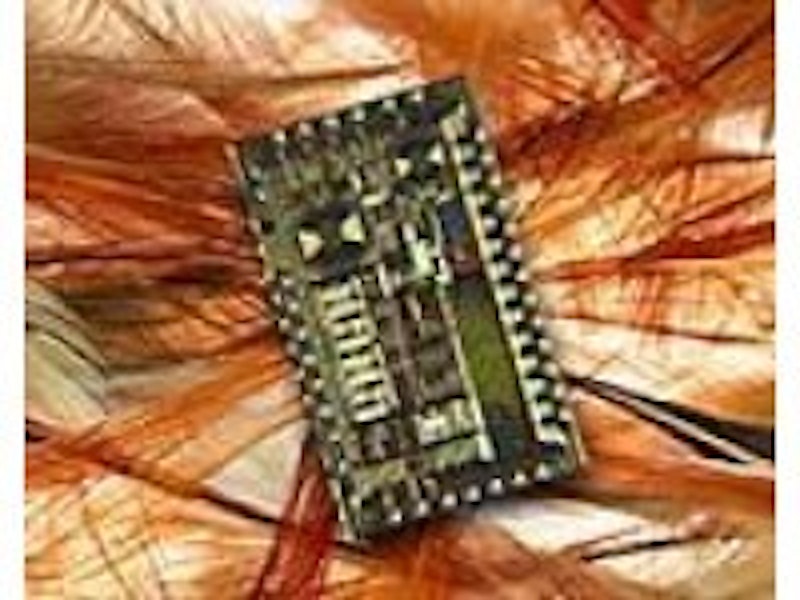 At a conference this week in San Jose, CA, attended by IDTechEx, Didier Sagan from Zarlink Semiconductor discussed developments and needs for wireless body area networks (WBAN).
Body Area Networks are devices in or around the body which are connected to each other. Sagan described the two main types of body monitors, those that monitor continuously such as ECG monitors, and "spot" monitors which take measurements at certain times, such as temperature, blood pressure, blood glucose etc. Today, these mainly involve wires connected to sensors on the body. The wires are constraining, can fall off and deteriorate with use. Zarlink Semiconductor and others are working on replacing these with wireless sensors.
The problem so far with wireless communications has been the relatively high power consumption needed, particularly where continuous monitoring is required. Not only do they need power in stand by mode but the peak power required to transmit data wirelessly requires a large capacitor that would be bigger than the battery itself if it were based on standard protocols such as ZigBee. Bluetooth, ZigBee, WiFi and other protocols are employed today for wireless sensors in healthcare but not for continuous monitoring, and the devices tend to be bulky and sometimes impractical due to the battery size.
Zarlink Semiconductor is developing an ultra low power (ULP) radio to make WBAN feasible. Their initial achievement was developing a sensor which can continuously monitor ECG status, drawing only 600microW and a peak current of 7mA. In other words, this would work continuously from a single regular 3 volt coin cell battery for several days. They have now developed a more improved version, using a lower voltage of 1.2 volts with average power draw of just 250 micro Watts. This is a magnitude lower in power than the 802.15.4 ZigBee protocol. However, a key issue here is the need for 1.2 volt batteries; currently 3 volt coin cells are the norm. A DC to DC converter taking a 3 volt coin cell down to 1.2 volts may waste 60% of the energy as heat. Sagan requests more efficient DC to DC converters with at least 85% efficiency and preferably 90%.
Sagan felt that batteries are also another area where improvement is needed. While rechargeable versions overcome much of the problem compared to primary cells which need to be replaced when they die, there still needs to be some control to ensure the batteries are recharged properly when needed.
Looking into the future, Sagan stated that once wireless transmitters can reach about 100 to 200 microWatts, their power can be generated from the body. Most promising would be to use the body's heat for sensors that are placed on the skin, or motion from limbs or chest expansion while breathing. The SIMM project is working on using the heat from inside the body to power pacemakers. The University of California Berkeley is even exploring chemicals in the body to power implants in the brain - effectively using the body as a battery.
Top image ultra low power tranceiver, source Zarlink Semiconductor
For more attend: Energy Harvesting and Storage Europe 2009
Also read: Energy Harvesting and Storage for Electronic Devices 2009-2019