Better traction batteries will lead to better batteries for energy harvesting. After all, both need to affordably pack more energy in a given space while improving battery life, fast charging and affordability.
In the quest to get even more energy in a given space and weight of rechargeable battery, the big money is directed at versions that will power the cars of the future, saving cost, oil dependence, the motor industry and the planet. That means playing with battery technologies that pack almost the power density of TNT explosive and only a few options for high energy density are currently inherently safe, for example not accepting overcharge. Mechanical and thermal safety must substitute for inherent chemical safety in those cases.
The two billion dollars being donated by President Obama to create the car battery of the future is only one such initiative across the world. Most of it will be spent on development and manufacture of lithium rechargeable batteries where there is a bewildering choice of chemistry, much of it little understood. The Americans seek to control their lithium battery production and have the best batteries using this chemistry, thus conferring advantage on the phoenix arising from its burnt out car industry. It is ambitious, because the USA makes less than one percent of the world's lithium batteries today. Indeed, East Asia makes almost all of the world's lithium batteries and it has got there by doing the easier small ones first, as used in mobile phones, laptops and other portable electronics. The USA seeks to leapfrog by starting with traction batteries for cars: in sales terms that is running before you can walk. 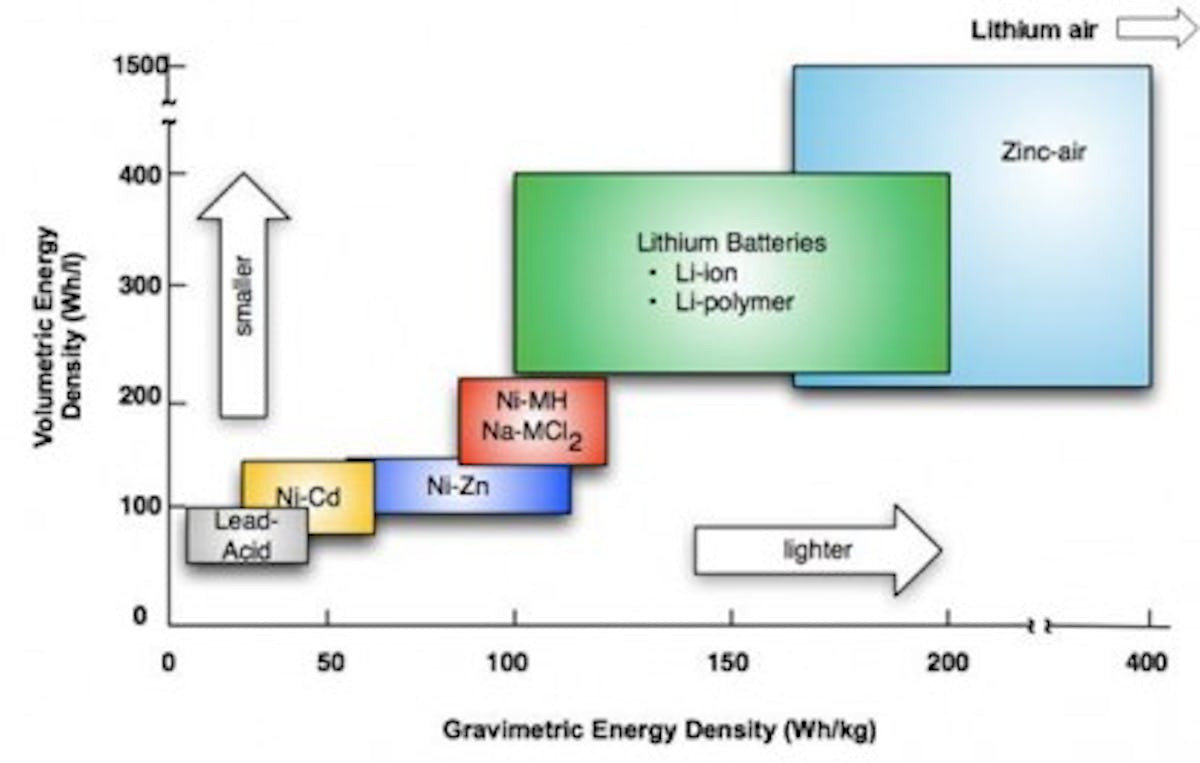 So what do you do if you wish to tame the most powerful batteries of all? Zinc air is a possibility being pursued by ReVolt. Sulfur based chemistry came in with single use lithium thionyl chloride batteries thanks to Tadiran Batteries. They are safely used in non-stop road tolling tags, wireless sensors and other applications, often with twenty year life. on the order of 1420 Wh/L, which is comparable to the theoretical specific energy of TNT explosive at 1922 Wh/L. Now lithium sulfur rechargeables are being explored by Sion Power Corporation in the USA working with BASF of Germany. In May 2009, they announced a Joint Development Agreement (JDA) to accelerate the commercialization of Sion Power's proprietary lithium-sulfur (Li-S) battery technology for the electric vehicle market and other high-energy applications.
The collaboration targets the development of battery materials to improve Li-S battery life and to increase the energy density and thus extend driving range of future EVs beyond what is currently available with alternative rechargeable battery technologies. Li-S technology already offers significant energy density and weight advantages over those existing technologies.
According to Dr. Dennis Mangino, CEO of Sion Power, "We are proud to be partnered with BASF, the world's leading chemical company, as we accelerate the development and introduction of our high energy, light weight, and transformational battery products. BASF's vast expertise in materials development and manufacturing are important to our success."
"We are excited to join Sion Power in advancing Li-S technology," said Dr. Thomas Weber, CEO of BASF Future Business "It is clear that Sion's technology offers high potential for significantly longer driving ranges over other technologies currently being considered for electric vehicles. We see a clear need for higher energy densities of the storage devices, and we will join forces with Sion to bring this technology to the market using innovative solutions. In combination with the lithium ion battery consortium 'HE-Lion' that we have formed recently, we further strengthen our efforts to advance battery technology."
During development process the team executed considerable patent protection for their device: they had patented both the proton sources with electron ionization and photo ionization and the proton beam source.

Now IBM has partnered with several national research institutes to tap the Obama billions to see if it can put lithium air batteries in every pure electric and hybrid car. However, they are not alone. A team of Japanese scientists at the National Institute of Advanced Industrial Science and Technology (AIST) have developed a new type of lithium-air battery cell with an ultra-large capacity which they claim has potential use in electric cars. They predict that drivers using these new batteries could use a cassette refill system at filling stations rather than waiting for batteries to be recharged.
Lithium-air batteries have great potential but a problem exists where solid reaction product (Li2O or Li2O2), which is not soluble in organic electrolyte, clogs on the air electrode (cathode) during the discharge process. If the air electrode becomes fully clogged, oxygen cannot be brought into the system. The researchers have remedied this by using an organic electrolyte on the anode (metallic lithium) side and an aqueous electrolyte on the cathode (air) side. The two electrolytes are separated by a solid state electrolyte (lithium super-ion conductor glass film - LISICON) so that the two electrolytic solutions do not mix. As a result, only lithium ions pass through the solid electrolyte, and the battery reactions continue correctly. At the cathode, the reaction product in the discharge process is water-soluble and no solid substances are produced. Continuous discharging of 50,000 mAh/g (per unit mass of the carbon, catalyst and binder) has been experimentally confirmed.
Top image: source: FastCompany
For more attend: Energy Harvesting & Storage USA 2009
Also read: Energy Harvesting and Storage for Electronic Devices 2009-2019
Batteries, Supercapacitors, Alternative Storage for Portable Devices 2009-2019
Hybrid and Pure Electric Cars 2009-2019
Car Traction Batteries - the New Gold Rush 2010-2020