With electric cars employing energy harvesting in shock absorbers, regenerative braking and photovoltaics on the roof, attention is turning to two wheel electric vehicles, starting with regenerative braking in electric motorcycles. Indeed, the rapid advances in the rechargeable batteries for two wheelers - lead acid plus some NiMH and lithium but with zinc air now a serious prospect - has lessons for rechargeable batteries used for energy harvesting. Two wheel electric vehicles (EV) have a bright future with sales already a magnitude higher than the numbers for any other type of EV. IDTechEx forecasts for 2010 and 2014 are as follows. They show 32% growth of value market partly because the average unit price actually rises. This is because the larger, more powerful two wheelers and the new designer versions start to sell in volume and therefore the mix changes.
Number in millions and market value in billions of US dollars for the global market for two wheel electric vehicles at ex factory prices. 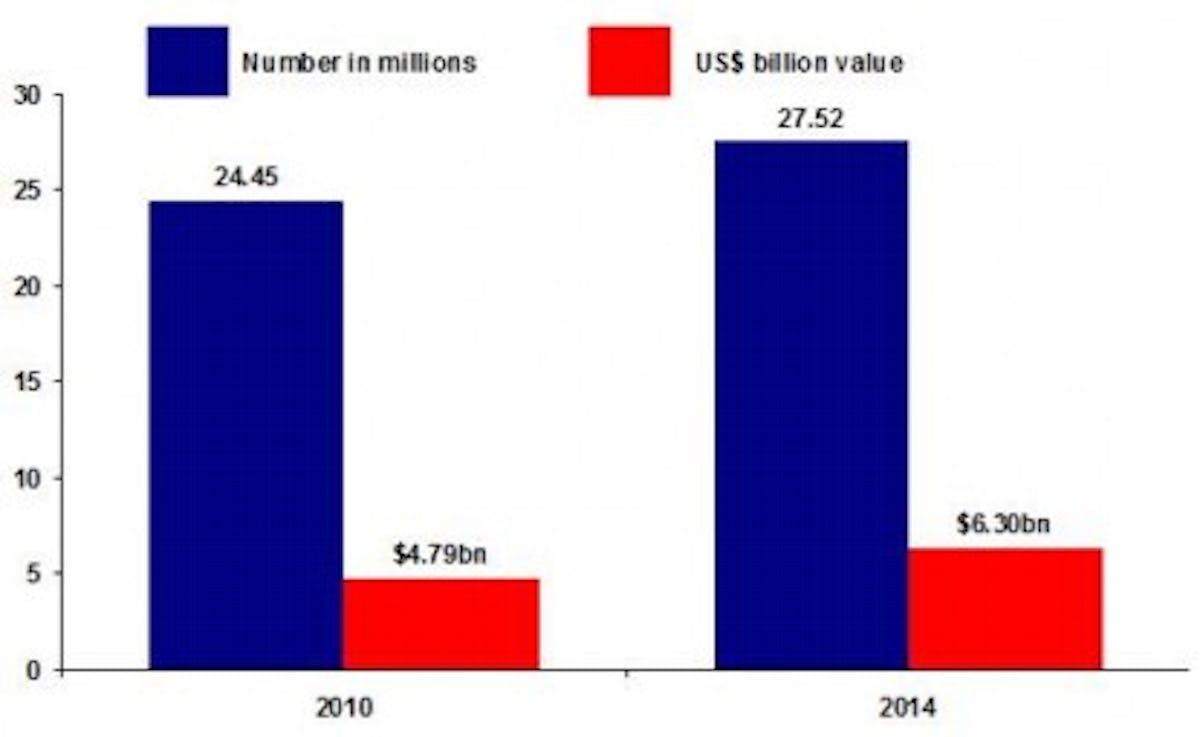 The action is moving beyond China. Already, more than 170 nations are buying e-bikes from China, according to the Chinese Bicycle Association CBA. Exports from China are booming.
In the new report "Electric Vehicles 2010-2020", IDTechEx states that, "We do not see the Chinese demand for two wheelers growing as rapidly in the next decade because there is likely to be firmer legislation that impedes sales by requiring tax and insurance on the larger e-bikes. Sales of basic e-bikes are already growing less strongly in the country. However, other newer types will grow substantially in sales, such as hybrid and later pure electric motorcycles in many countries, including China. The new hybrid two wheel scooters also have a bright future."

For all this success, the potential will remain huge. Over 200 million two wheel vehicles are made yearly in the world, so only about 12% of new two wheelers delivered each year are electric so far. Of the total number out there, electric versions constitute only a few percent.

Annual production of all types of bicycle has declined in most years since 1995 but, within those figures, two wheel electric vehicles have grown rapidly in both numbers sold and market value from 1995, reaching just over 20 million vehicles in 2005. After that, sales of electric two wheelers have grown more slowly, remaining almost totally reliant on sales of price sensitive electric bicycles commonly known as e-bikes, mostly with old fashioned lead acid batteries. That is about to change.

China is key to electric bicycle sales and production just as it is key to bicycle sales and production. In 2000, China became world leader in production and use of electric bicycles, overtaking Japan which did the pioneering of both manufacture and use, with its market peaking in 1997 and only partly recovering by 2003. The Chinese market for electric two wheelers was estimated by CycleElectric International as being about 1 million units annually in 2001. This rocketed to about 20 million in 2005 then it grew more modestly to around 21 million in 2009. There are about 2400 companies in China that are involved in some way with supplying electric bikes or electric bike components according to CycleElectric.
Sanyo expects the recent recovery in Japanese sales to take the figure from 315,000 in 2008 to 400,000 in 2011, still a tiny proportion of sales in China, albeit at higher prices. In Japan, the laws concerning two people riding one electric bicycle have been eased. According to some reports, sales of e-bikes have been growing 50% yearly in the USA but that is from a small base. Accordingly, in 2010, China still produces and uses over 90% of the electric two wheelers in the world, this total market primarily comprising e-bikes, e-scooters and e-motorbikes.

We are entering a new growth phase partly driven by e-motorbikes becoming affordable and performing more impressively. For example, the Mission Motors Mission One pure electric motorcycle, produced in the USA, achieves 150 mph (242 km/h) and 150 miles (242 km) range and the Killacycle, also from the USA, has even more impressive acceleration and top speed, because it is aimed at record breaking not volume sales. The first all-electric motorcycle race has taken place on the Isle of Man in the UK, famous for the TT races. The winning vehicle is being put into production. Those now seeking to break records with motorcycles make electric ones.

As with cars, vibrant niches of very high performance and specialist vehicles are emerging. Designer two wheelers command high prices. Mostly they are motorcycles and here the Chinese are laggards as yet. For instance, Zero Motorcycles in the US now has a premium priced, high performance electric dirtbike. Yamaha has just launched a top of the range carbon composite e-bike in Japan. On the other hand, Honda is launching an electric motorcycle for postal and pizza deliveries and other commercial uses in 2010.

The new growth phase is particularly influenced by hybrid two wheelers, notably scooters and motorcycles, entering volume production. These appeal because they have greatly superior range to pure electric two wheelers combined with better fuel economy and emissions than conventional equivalents, mimicking the successful hybrid cars. For example, Eko Vehicles in India announced a range of hybrid scooters in 2009 and the planned Honda EV-Cub is a hybrid scooter. Xtreme Scooters of China has had good reviews of its new hybrid versions. Huge new government grants and tax breaks have a part in this trend.

Interchina Industry Group manufactures a foldable electric bike attractive in China because most bicycles are used for commuting to work. This is a hybrid. It uses a 70cc petrol engine and an electric motor to propel the wheels, and has a maximum speed of 76 mph (120 km/h). Some two wheel electric vehicles resemble a child's push scooter because the driver stands on the tiny machine. Some of these fold to go in a car: indeed some cars have been supplied with them. Now the larger Tronix Ebike Exceed, entering production in 2010, folds to become small enough to fit in trunk of small car.

As with pure electric cars, range and speed of the mainstream affordable two wheelers are improving gradually thanks to lithium batteries and other innovations. For example, the Xtreme XM 5000Li scooter can manage 85 miles (130 km) and 60 mph (96 km/h). The Peugeot E-Vivacity pure electric scooter from France, being launched in 2010, has a range of 50 to 60 miles (81-96 km), an improvement on earlier unsuccessful models, thanks to a lithium battery.

As with fuel cell powered cars, fuel cell powered two wheelers remain a triumph of hope over reality though perhaps their day will come. The UK company Intelligent Energy worked with Suzuki to create the Crosscage Fuel Cell Motorbike and, in 2009, there followed the Suzuki Burgman Fuel Cell Scooter. For ten years, many companies have shown fuel cell demonstrators. The problems are the same as those with other fuel cell powered vehicles. They include funding the necessary fuelling infrastructure, safety, start up time and complexity. For example, a high performance battery is still needed. Volume sales of fuel cell powered two wheel vehicles remain many years away.

The technology of electric two wheelers is very varied with much use of lead acid and of lithium batteries of many chemistries and even some nickel metal hydride. The second generation lithium batteries are inherently chemically safe and new advances are announced all the time. The main technology trend is the increasing use of lithium batteries because of their smaller size and weight, better performance, increasing affordability and freedom from Chinese control of lanthanum supplies. Lanthanum is a worry with nickel metal hydride batteries and rationing has already begun.

Regenerative braking is increasingly seen on most types of two wheeler, though the percentage is, as yet, small. Fast charging is also increasingly feasible in the home or at stops on the journey. All that means that supercapacitors have a place with two wheelers because fast charging and discharging with batteries alone tends to mean poorer energy storage. This concentration on two wheelers, because ofdemand, is in contrast to the USA where similar challenges are being solved for hybrid commercial vehicles etc. The high performance vehicle traction ultracapacitors of AFS Trinity Power Corporation are a breakthrough in large vehicle hybrid performance, for example.

Brushless motors of different types are involved with some move to ac. Motors are various rated from about 0.2 to 70kW for those designated scooters or motorcycles by their manufacturers. Those at the bottom end of that range have more in common with e-bikes, however. In the mainstream are motors delivering 8-10kW. Wheel-embedded motors are gaining favour as they are in cars, though from a minority position. Vietnam's largest motorcycle manufacturer Sufat has just started production of electric scooters that reach 50 mph (80 km/h) in under ten seconds and top speeds twice those of earlier models thanks to new wheel-hub motors from KLD Energy Technologies in the USA.

The Segway with two wheels alongside, relies on a gyroscope for balance. The folding Yike Bike from New Zealand which enters production in 2010 has a large front wheel and a small one in line behind. It also steers by body movement but without the gyroscope. There are many other innovations coming along and most of them create small, additional niche markets. Another trend is the increasing number of manufacturers making many types of electric vehicles, including two wheelers, and sharing innovations between them.
Top image of electric bicycle source jcwinnie
For more read : Energy Harvesting and Storage for Electronic Devices 2009-2019
and Electric Vehicles 2010-2020
and attend Energy Harvesting & Storage Europe and Wireless Sensor Networks & RTLS Summit 2010