What's on the Energy Storage Market Beside Lithium-ion Batteries? Pt 2 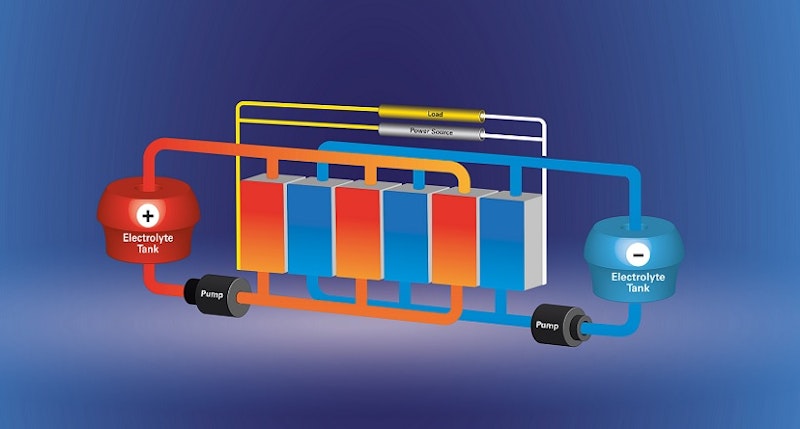 In the first part of this series of articles, an overview of the flow batteries characteristics has been provided, extrapolated from IDTechEx's recent report "Redox Flow Battery 2020-2030: Forecast, Challenges, Opportunities". In this second article, a more detailed analysis about the different chemistries will show the main RFB technologies currently available or under development, beginning with the most adopted and investigated Redox Flow Batteries (RFB), the Vanadium Redox Flow Batteries (VRFB).
Initially studied by NASA, and further developed in 1980's by the research group led by Maria Skyllas-Kazacos at New South Wales in Australia, the Vanadium redox flow battery (VRFB) are today the most studied and manufactured technology within the redox flow battery technology. Besides different type of RFBs, the vanadium technology (and similarly the All-Iron RFB) employs the same electroactive species (vanadium) in both electrolytes, with different oxidation states. The following reactions take place during charge and discharge of VRFBs:

Figure 1. Right Side - Chemical reaction taking place at the anode, and cathode interface. Left Side - Different colours of the Vanadium electrolyte due to the different oxidation states.
The low round-trip efficiency and the high cost of vanadium (directly affecting the cost of electrolyte) are two of the main VRFBs' drawbacks. The electrolyte alone accounts for 30% to 40% of the overall technology cost. To reduce the effect of vanadium cost on the overall system, an increasing number of companies started collaborations with vanadium mining companies. The aim of the collaborations is to improve the vanadium electrolyte performances by increasing the vanadium concentration (moles of Vanadium per litre of electrolyte). This would allow reaching the higher energy density of the battery, and the reducing of the cost.
According to the investigation conducted by IDTechEx, it was clear that some mining companies themself are interested in the VRFB technology. This is the case for the South African mining company Bushveld Minerals. Bushveld Minerals is in fact actively promoting the adoption of vanadium flow battery all over Africa. Outside of the African countries, Bushveld backed the merge between two VRFBs manufacturers (the English redT and the American Avalon Battery), and in 2019 announced to acquired a consistent share of Enerox-CellCube, previously known as Gildemeister AG.
Although the Vanadium technology dominated the flow battery scenario, over the last years a growing number of other redox flow batteries are populating the market.

Besides the Vanadium flow batteries, the zinc-bromine technology is the second in the rank of adopted technologies.
Technically different from a VRFB, the ZBB are based on a solid zinc electrode and a liquid bromine electrolyte, which gives to this technology a higher energy density than VRFBs.
With the Australian Redflow and the America Primus power dominating the scenario, this technology is slowly (but not too slowly) acquiring its share of the flow battery market.

Developed by the American company ESS Inc., the promising all-iron RFB is characterised by the use of the iron as electroactive species in both electrolytes (catholyte and anolyte). The low-cost iron electrolyte brings large advantage in terms of cost; although other limitations, such hydrogen evolution, affect these kinds of battery.

Already on the scene for a few years, the hydrogen-bromine flow battery is one of the future redox flow battery approaching the market. Behind the development of this technology the Dutch company Elestor, which in 2019 received a multi-million investment from the Dutch conglomerate Koolen Industries, in addition to the EIT Innoenergy, already an early investor in Elestor. Moreover, the company is involved in the European MELODY project, related to the development of a sustainable redox flow battery technology that can effectively reduce the costs of electricity storage to support large-scale.
The increasing number of redox flow battery chemistry are increasing the competition, besides the interest in this technology. As highlighted in the IDTechEx report, a CAGR of ca. 30% is expected in the next 10 years, although the increasing adoption of renewable energies and green policies toward the reduction of pollutant, might bring a larger adoption of this technology.
For more information on this Redox Flow Battery market report, please visit www.IDTechEx.com/Redox or for the full portfolio of Energy Storage research available from IDTechEx please visit www.IDTechEx.com/Research/ES.
IDTechEx guides your strategic business decisions through its Research, Consultancy and Subscription products, helping you profit from emerging technologies. For more information on IDTechEx Research and Consultancy, contact research@IDTechEx.com or visit www.IDTechEx.com.