In the last six months, IDTechEx has finally obtained working samples of many types of flexible photovoltaics - amorphous silicon, dye sensitised solar cells, copper indium gallium diselenide and organic. We have also obtained solar bags for charging laptops and mobile phones that are based on some of these. At Europe's largest event on the subject "Printed Electronics Europe 2010/ Photovoltaics Europe 2010" the latest position on all this was spelt out by experts of global standing from Neubers selling 5000 of organic solar bags per month and Toppan Forms and several designer brands launching them to various teams developing the different photovoltaic technologies. 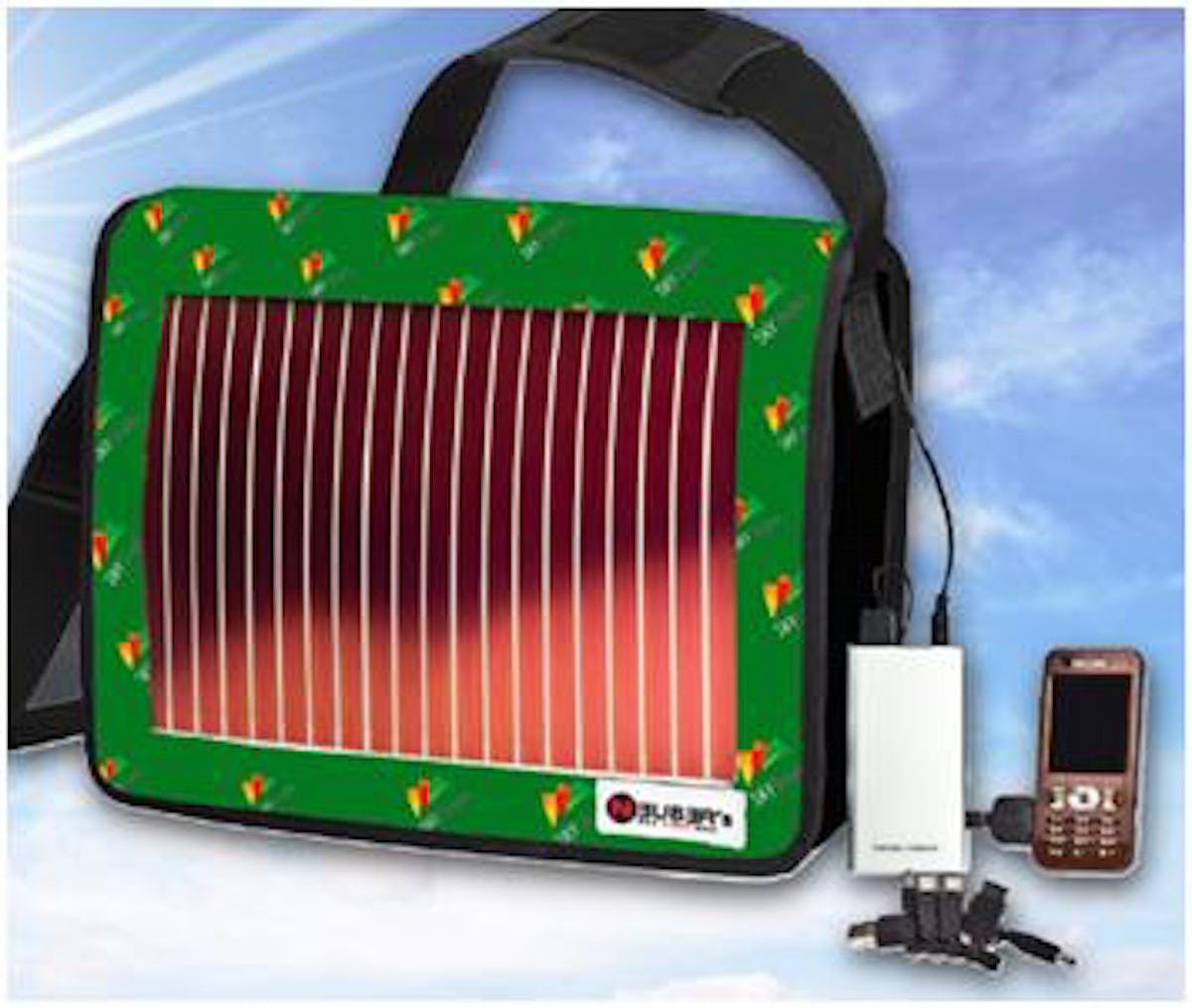 Source Neubers
The organic versions have the lowest efficiency and shortest life but they are getting the most attention because it is hoped that they will be lowest cost. This is not because of the materials used but because of the expensive processing of the inorganic options at present. None can bend around a diameter of less than about three centimeters at present. This limitation is due to the brittle indium tin oxide transparent electrodes used in all but the DSSC versions and due to the active layer itself in most cases. That will not always be the case.
The French energy company Total explained why it is backing organic options in its partnership with Konarka, which it sees as technology leader in this organic PV "OPV". Total expects that efficiency wwill rise to 10% for production versions within 2-3 years and life rise from 2-3 years to 3-5 years.
It was noted that, on the physical property side, OPV is flexible, light and can be adapted to different sizes and shapes. Optically OPV is potentially coloured, can be made as see-through products and has specific optical sensitivities. OPV is made from abundant raw materials, will be produced at low costs with a conversion efficiency reaching attractive values potentially close to 10%.Expected markets as seen from today's PV businesses could be the portable, stand alone or wearable applications, lightweight shading devices, decoration or building integrated systems and what we call 'commodities' for potential emerging markets.
The move away from the obsession with replacing power stations by reaching the elusive "grid parity" in cost was a recurring theme in the conference. For example, Ascent Solar, founded as recently as 2005, is in production with flexible photovoltaics of a superior 10%+ and its applicational targets are as shown below. 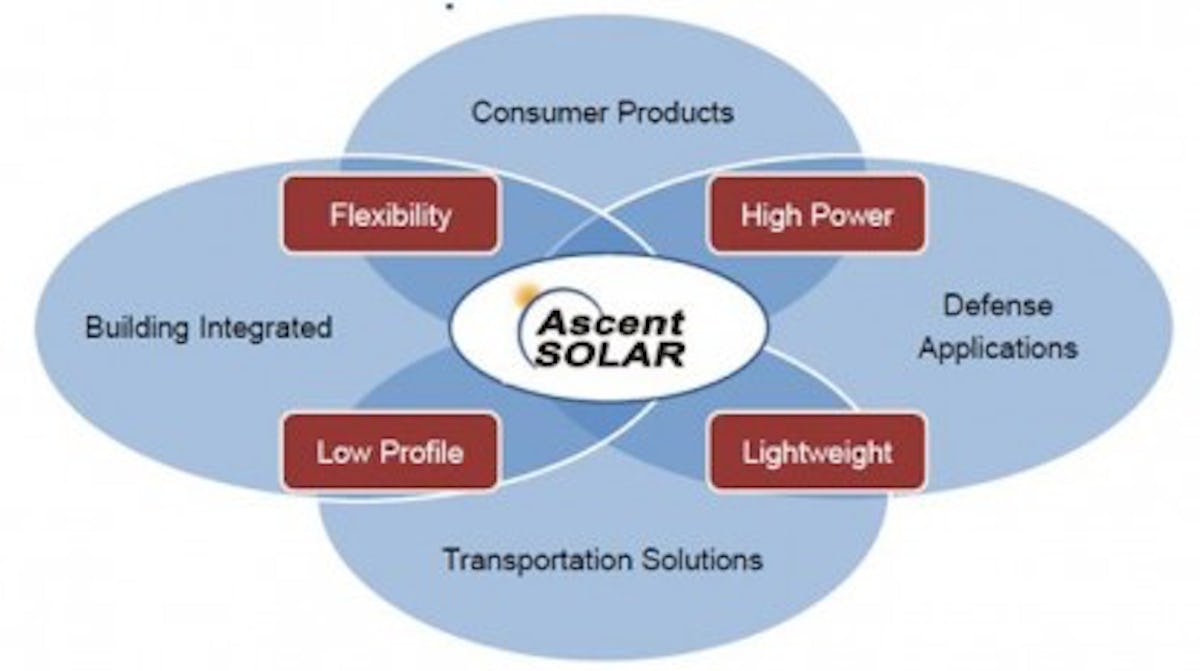 Ascent Solar described its value proposition for consumer applications includes being drop resistant, light weight and having high power and voltage density when compared with crystalline silicon but also the capability of being fully integrated into products.
Mobile phones look extremely interesting, with even conventional photovoltaics having some penetration already. The Ascent Solar appraisal was:
Usage growing significantly in the developing world
Access to power for charging a challenge
Significant incentive for operators to solve charging challenge
Solar accepted as a viable solution
Q-mo Solar, a new company established in 2009 is following a similar approach of encompassing a variety of applications, aiming to make available rigid and flexible versions, all-black versions, miniature, ultra flat and indoor versions too for consumer as well as industrial applications. Dr Oliver Lang, one of the founders of the company, said at the conference that after approximately 5 years of research and design efforts, the company has market ready innovative production technologies for high efficiency solar cells on new substrate materials, using novel assembly, contacting and encapsulation solutions. He listed a huge number of potential consumer and other applications.
Dr Karsten Otte, CEO of Solarion also spoke of CIGS deposited on plastic substrates, and focused on issues relating to roll to roll manufacturing of these devices, as well as the different ways of building up the different active, passive and encapsulation layers of the device. The company has achieved efficiencies of over 14%, by depositing active layers through a proprietary ion beam process on polymer substrates, with resulting modules that are very flexible and light.
Dr Murat Okandan continued on the same track of providing innovative ways of looking at solar cells: He's developing "glitter sized" photovoltaics" at Sandia National Laboratory in the USA, with the view of using them along with a concentrator film in applications where miniaturization is essential. The tiny cells are fabricated out of crystalline silicon using MEMS techniques and allow developers to envisage novel uses such as wrapping unusual shapes and surfaces (e.g. clothing) in solar cells, turning them into energy harvesters. 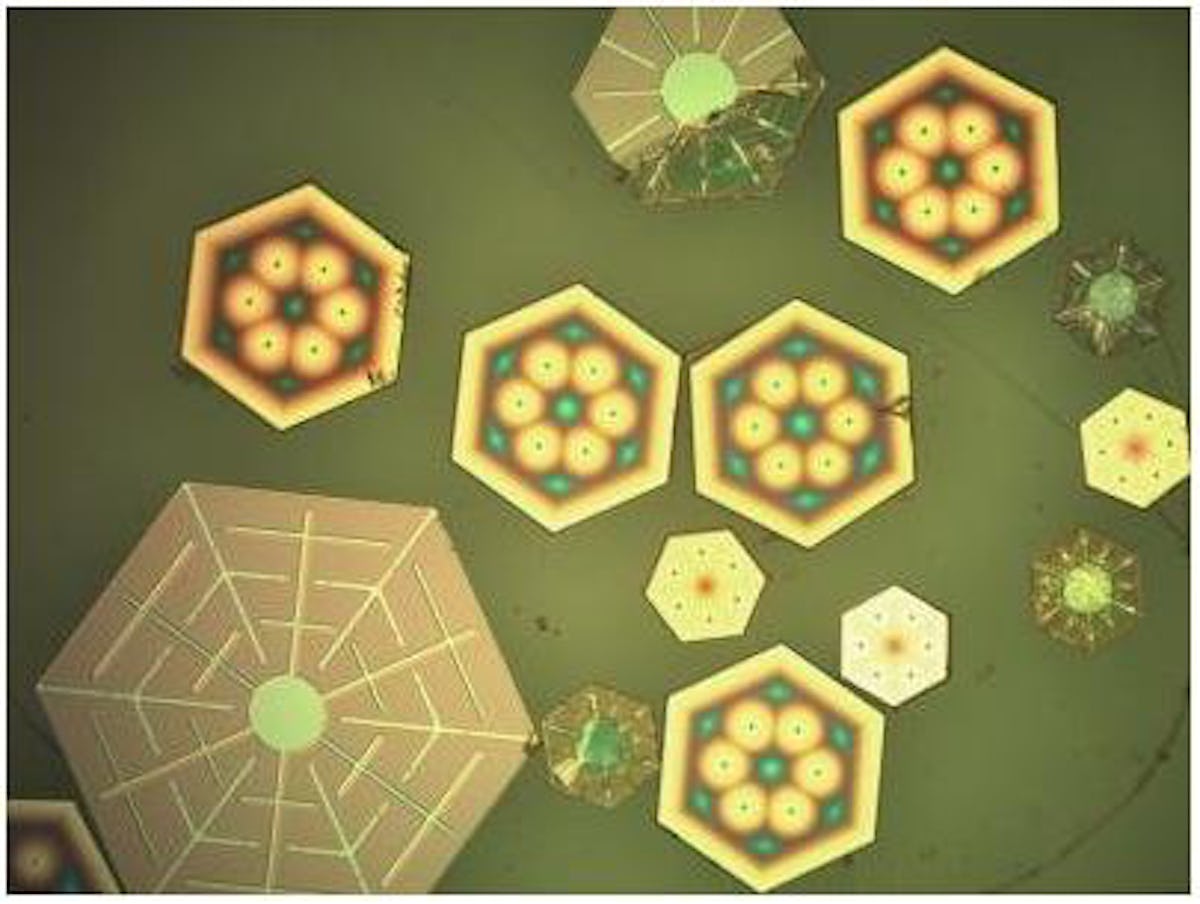 Source: Sandia National Laboratory
On the field of organic photovoltaics and dye sensitized solar cells (DSSCs), progress continues to be made both in academic research and in industrialization efforts.
Presentations came from all over the world: Konkuk University in Korea, CSIRO in Australia, Universitat Jaume in Spain, outlining directions that research in these novel photovoltaic technologies are following.
In the commercialization front, Keith Brooks of Dyesol focused on the challenges the company has faced in their bid to make DSSCs widely available: the main topics of interest for Dyesol remain the increase in lifetime and efficiency that will lead to improved performance and a much more competitive final product.
The irony of all this is that, after all those years of chasing grid parity, the addressable market for flexible photovoltaics is almost certainly larger outside of replacing power stations, not least because so many of the applications are disposable or at least short lived
For more read : Energy Harvesting and Storage for Electronic Devices 2009-2019
and attend Energy Harvesting & Storage Europe and Wireless Sensor Networks & RTLS Summit 2010