Mr. Joe Keating, director, applications engineering manager with Infinite Power Solutions, Inc. (IPS) talked to IDTechEx technology analyst Harry Zervos about the company's developments and its positioning within the emerging energy harvesting sector.
IPS is a leading developer of energy storage and power management solutions. The company is developing thin-film micro-energy storage cells, THINERGY®™ MECs, rechargeable, solid-state lithium batteries, a proprietary technology originally developed at Oakridge National Laboratory. The cell's chemistry consists of a lithium anode and a LiCoO2 cathode separated by lithium phosphorous oxynitride (LiPON), which is also the solid state electrolyte.
"The total energy storage for THINERGY®™ micro-energy cells is under 100 joules, typically around 10 joules, and power output ranging from a few hundred mW down to the µW level. Aside from the thin form factor, the absence of liquid electrolytes eliminates leakages and allows for impressive cycle life: Tens of thousands of deep discharges." 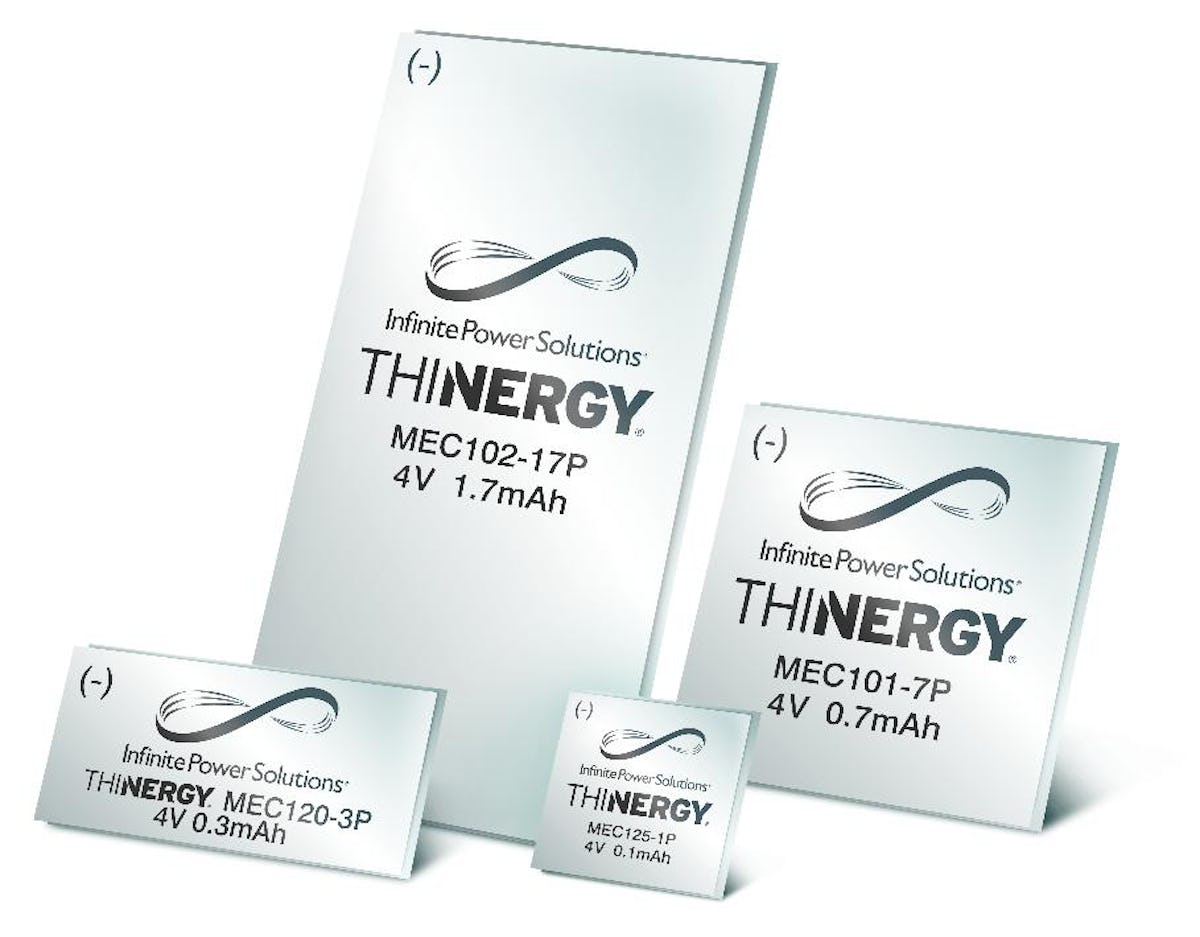 Regarding the markets that IPS is addressing, Joe commented: "Thinergy THINERGY MEC specifications mean that the target market tends to be small independent products such as wireless sensors, implantable devices and powered smart cards. We work very closely with our clients and develop custom modules that utilize Thinergy™ MECs in the specific applications of their interest. At the same time, energy management systems ICs have been developed from companies such as Maxim and Linear Technologies that are compatible with our technology." And he continues: "The performance characteristics and form factor of the MEC makes it a perfect match for applications where there are requirements for embedability or long lasting performance without need for replacement, wireless sensors on a Zigbee network being a very good example. At the same time, combined with energy harvesters MECs enable modules for wireless sensors for instance, able to deal with asynchronous energy storage and usage."

The creation and access into new markets by emerging technologies is never an easy path. In this case, one of the main hurdles is competition from existing, widely used combinations of batteries and supercapacitors that have achieved low manufacturing costs. "Rechargeable batteries are still a hard sell in some cases, like the smart card space for example," Joe says. "It's difficult to change management mentality that's not very good at taking chances. New technology is hard to accept unless there's an immediate cost saving. When there are new costs incurred, clients are not always ready and willing to absorb them."
Although initial penetration is always tough, there are still ways which can lead to gradual adoption. Focusing on smaller opportunities in order to demonstrate the new technology's capabilities is a good starting point. Once the resulting advantages are documented, it becomes much easier to make a case for usage of new technology in order to enhance performance. "An interesting example is starting with e.g. a security company that requires biometric smartcards, initially at the 100,000 units level" says Joe. "Further down the line, customer satisfaction and even higher government mandated security requirements will lead to further adoption".
Another interesting approach is of course, the creation of market pull, i.e. convincing potential clients of the value of added functionality such as biometrics. "Problems arise in such cases, such as the lack of standards but sufficient pull will eventually lead to participation".
But everything's not as difficult as it might seem to be from these challenges faced. In recent years, and with the additional exposure that the energy harvesting space is receiving, there's currently a much better uptake experienced, maybe not as much as an excitable technology developer would like, but it's still measurably higher. According to Joe, specifically in the smart card space, approximately half of potential clients believe in the advent of energy harvesting whereas the other half is still sceptical. "In the next three to five years there will be increased adoption experienced and company-wide strategic initiatives, green incentives and government mandates will push the market growth even further."
IPS is definitely ready to take on the challenge: With volume production up to 1 million units per year (adequate to satisfy current market demand), the roadmap for manufacturing at IPS facilities foresees capability to grow to the hundreds of millions level.
For more information on IPS and its proprietary technology, please contact Terri Sundseth, Marketing Associate, tsundseth@IPSbatteries.com, 303.749.4754.
For more read : Energy Harvesting and Storage for Electronic Devices 2010-2020
and attend Energy Harvesting & Storage and Wireless Networks & RTLS Europe 2011