In recent years, there's been a surge of energy harvesting applications in the automotive sector, with a host of technologies utilized, each characterized by different achievable levels of power. Waste heat recovery systems have attracted a lot of attention with several car manufacturers working on developing their own harvesting systems. Some of them are described below.

As part of FORD's work on waste heat recovery systems, the company has produced a thermoelectric generator (TEG). It is expected to deliver approximately 500W of power and is constructed utilizing half-Heusler and Bi2Te3 segmented elements. 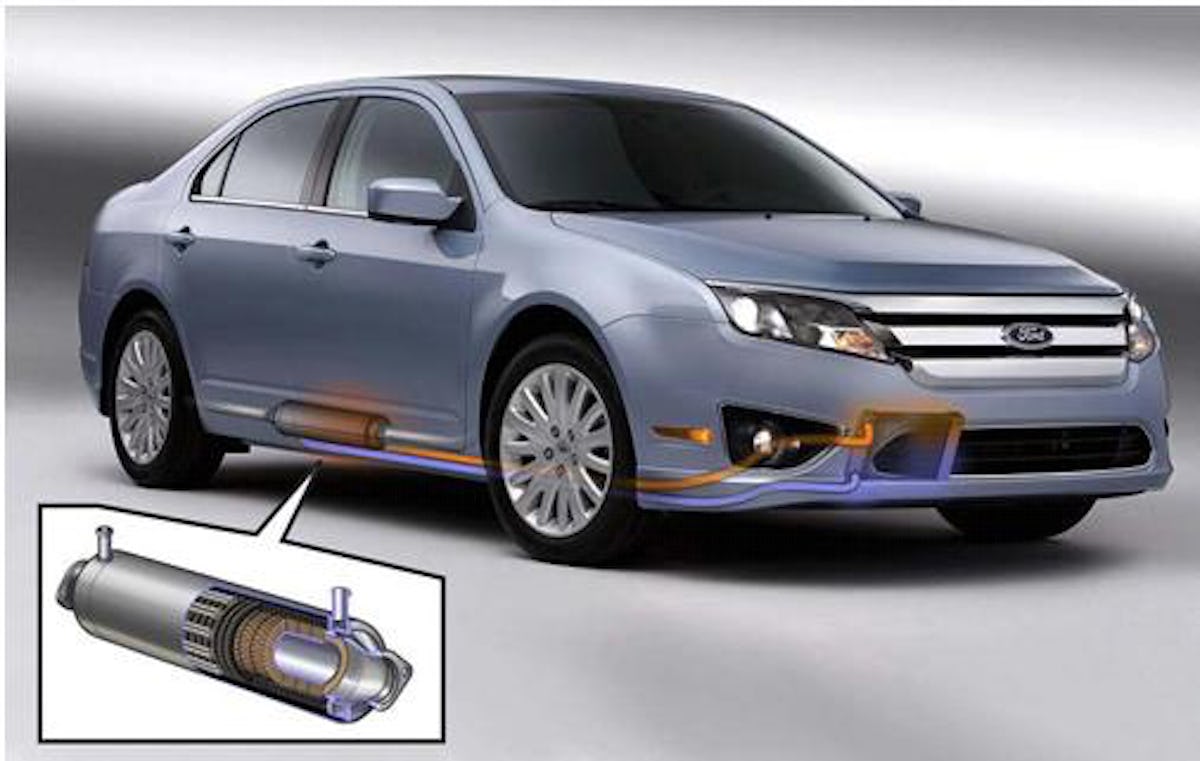 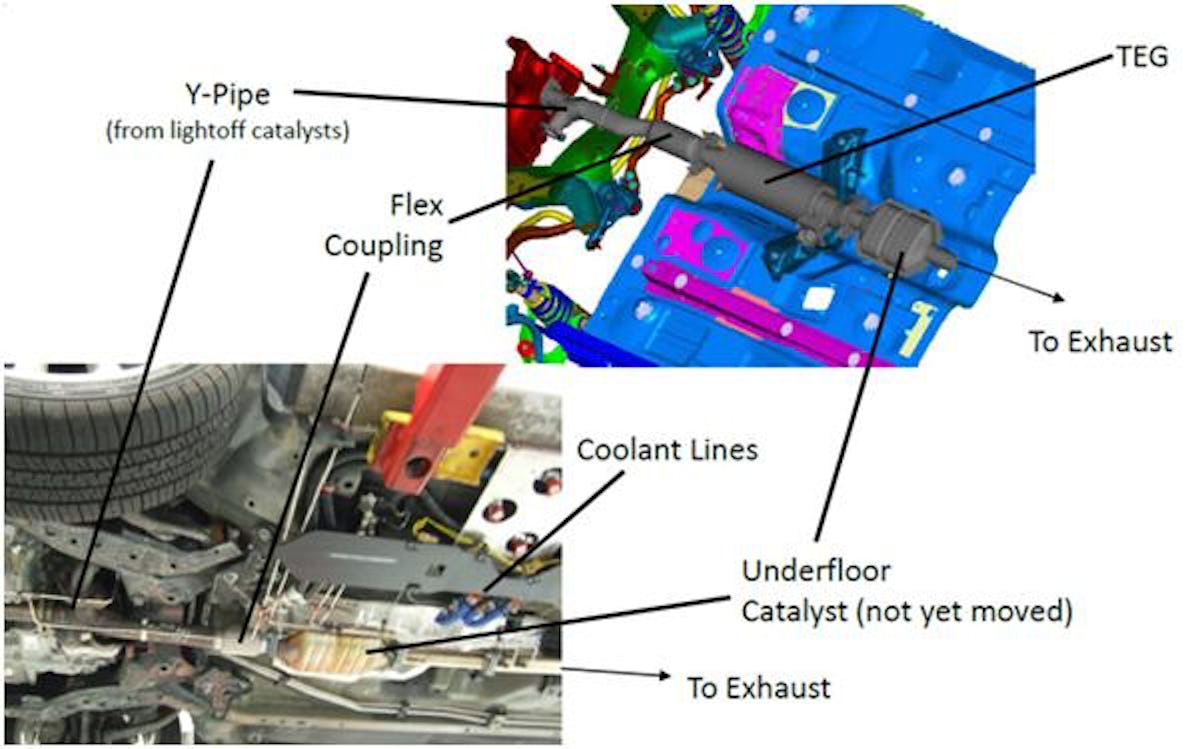 Demonstration of a TEG on a Ford Fusion 3.0L-V6. Source: Ford
The TEG has been demonstrated on an actual vehicle, a 3.0L 6V Ford Fusion. According to Ford, a major benefit in a vehicle-level demonstration is the ability to understand systems-integration implications. Significant research and investment is still needed in the areas of cost, performance, thermal management, systems integration, manufacturing, and durability. This is very closely related to the large amount of requirements in order to see thermoelectric technology integrated onto a production vehicle, with the table below giving us a list of examples. 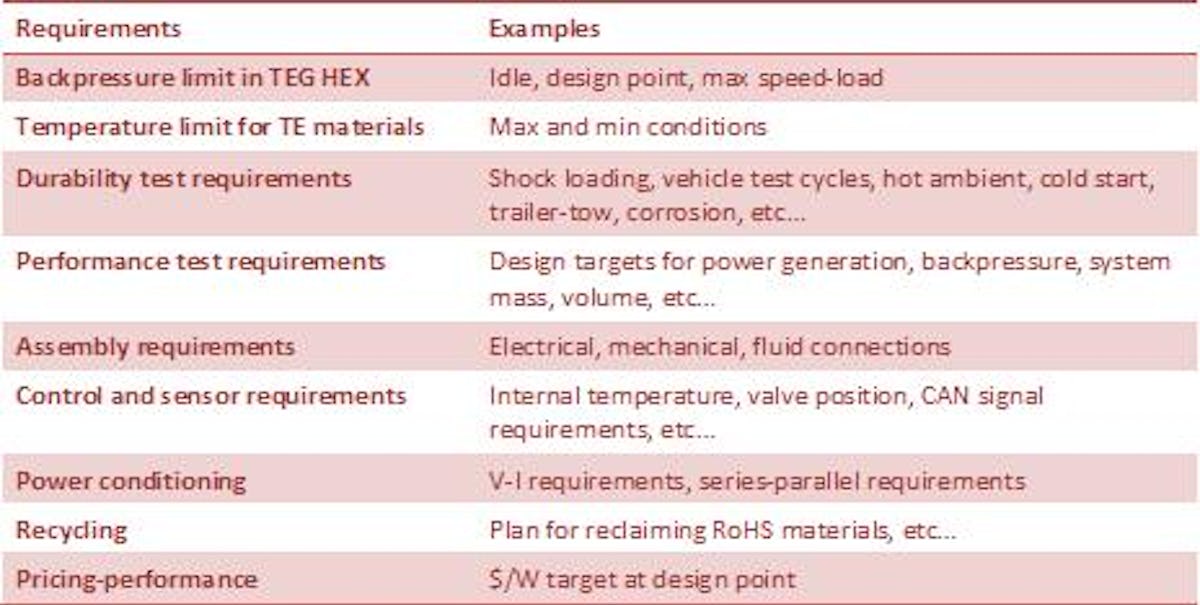 Automotive requirements from a TEG Source: Ford
The US Department of Energy has been involved in several projects on the integration of TEGs in vehicles, (including those on the BMW X6 and the Ford Fusion as well as similar work on the Chevrolet Suburban) as parts of its target reduction in fuel consumption by 10%.

Renault Trucks, a company of the Volvo Group embarked on the RENOTER project, a 3-year project with a €4.2 Million budget (partially funded by the French Government) and involving 8 partners. RENOTER's targets are set at recuperating different amount of waste heat for different types of vehicles:
The focus is on cheap, readily available, efficient, and sustainable thermoelectric materials with a target cost of 0.3 - 1.3 $/W all inclusive. Efficient material integration and production process are also paramount.
As an example of a heavy duty truck application, the Renault Trucks Premium, an 11L engine vehicle with a fuel efficiency of 6.8mpg will be using the exhaust gas recirculation cooler as the heat source. 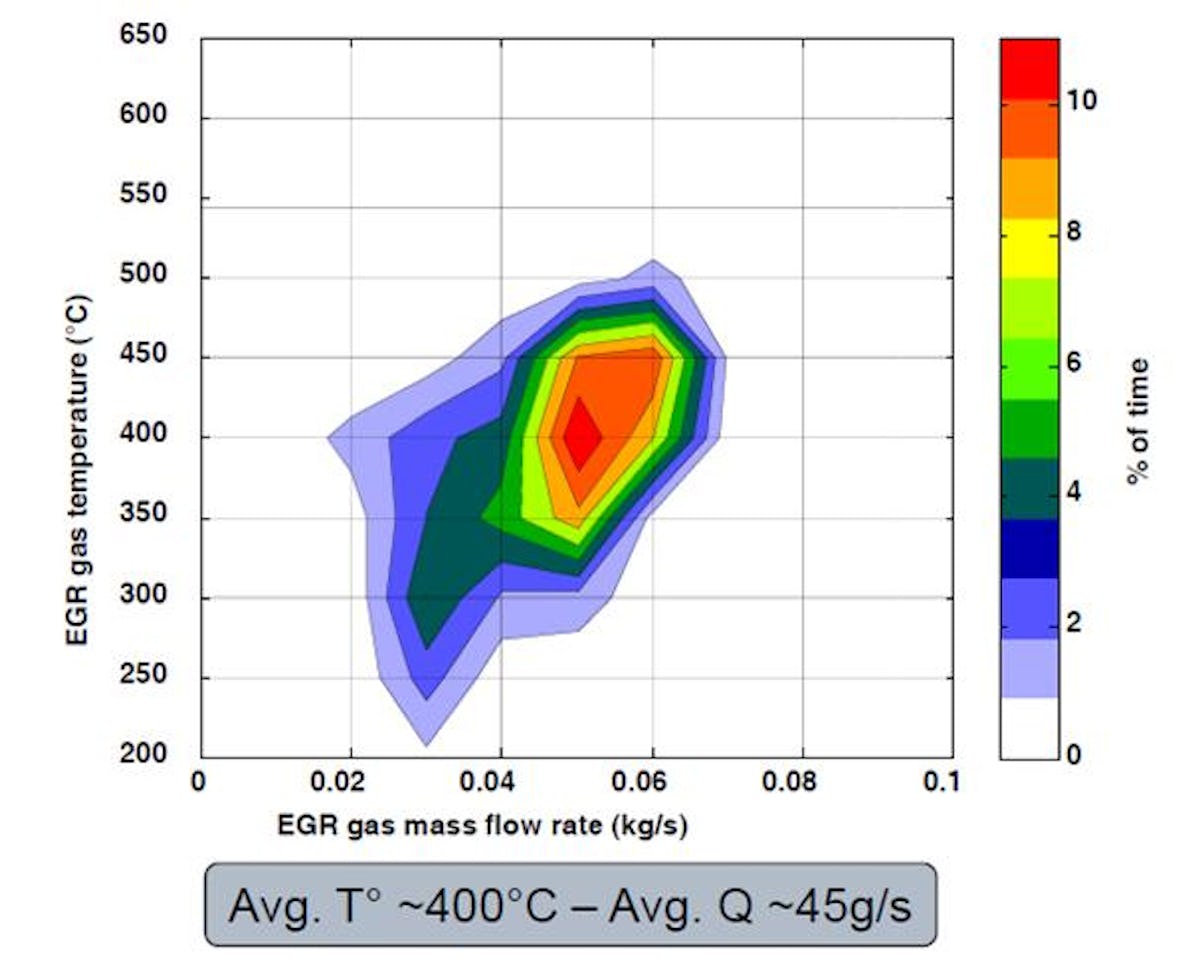 Exhaust Gas Recirculator specifications. Source: Renault Trucks -Volvo
In the case of passenger cars on the other hand, the TEG heat source has been chosen to be the exhaust line.
To hear more from Ford and Volvo discussing their projects on waste heat recovery systems, attend the IDTechEx Energy Harvesting conference in Boston, MA, where other automotive applications will be covered by companies such as Electric Trucks and Levant Power discussing shock absorber technology. There will also be further discussions of applications of thermoelectrics in a variety of sectors with presentations from companies such as Marlow, Nextreme, BASF and Amerigon.
For more information, visit the conference website
For more read Energy Harvesting and Storage for Electronic Devices 2011-2021
And attend Energy Harvesting & Storage and Wireless Networks & RTLS, November 15-16 2011, Boston, USA