While some energy harvesting technologies seem to be receiving most of the attention, the nature of innovation itself means that other than the most popular material systems, there are emerging ones too that allow for a host of applications to be envisaged, utilizing different ambient sources of energy or different material systems. Since the world of energy harvesting is not just solar harvesters and PZT, in this article, the focus is on magnetostrictive materials and lead-free piezoelectric harvesters. Both topics will be covered at the IDTechEx Energy Harvesting & Storage conference in Boston, MA on November 15-16 along with a range of other applications and technologies.
Magnetostrictive Materials
Magnetostriction is the property that causes certain ferromagnetic materials to change shape in a magnetic field; it is also called the Joule Effect.
ETREMA (who will be presenting in Boston next month) is a high-tech Iowa corporation engaged in the development and commercialization of magnetostrictive smart materials. While most attention has been focused on the active aspect of magnetostriction (electrical-to-mechanical), several different applications have recently begun to exploit the reverse phenomenon, commonly called the Villari Effect. Working in collaboration with ETREMA, Toshiyuki Ueno, associate professor at Kanazawa University, developed a vibration-driven generator that can generate 2W of electricity. 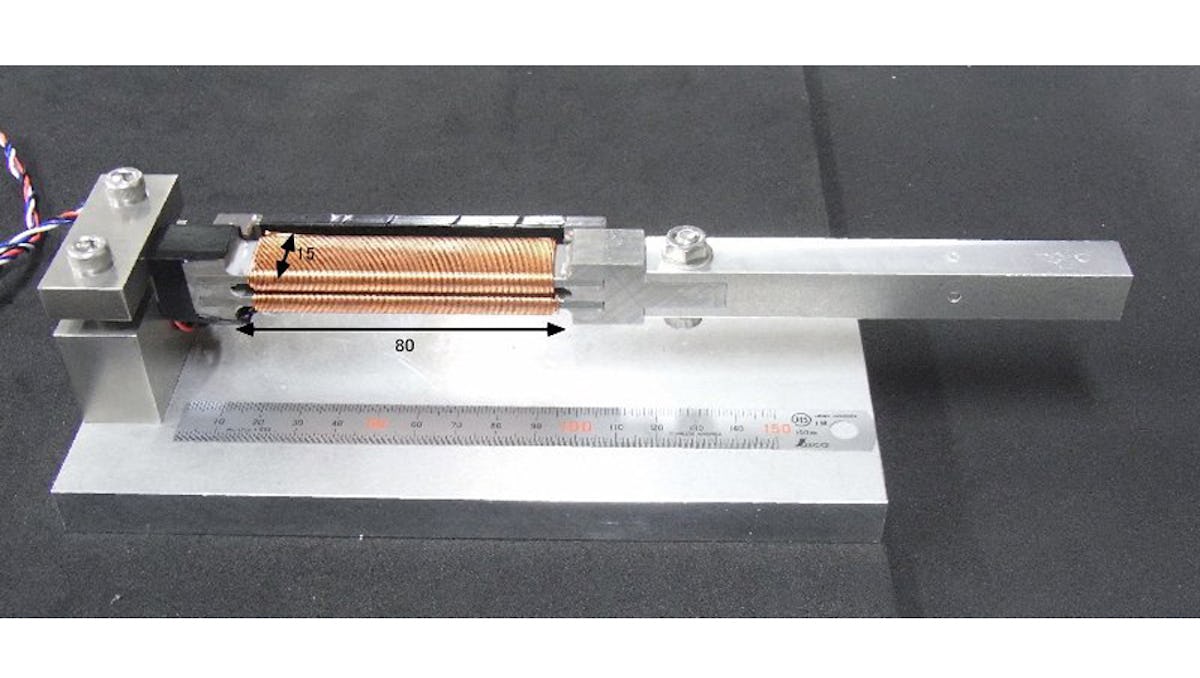 Vibration generator using the inverse magnetostriction effect. (dimensions 250:L x 20:W x 20mm H). Source: Kanazawa University
The new generator has a simple structure. The ends on one side of two long and thin magnetostrictors are fixed, and weights are attached to the other ends (parallel beam structure). Thin electric wires are wrapped around the magnetostrictors so that they can be used as coils. In that way, electricity is generated by contorting the magnetostrictors with vibration. The magnetostrictors are made by using GALFENOL , an alloy of iron and gallium.
GALFENOL is the latest material to be invented at ETREMA, and is currently under development. Originally invented in 1998, GALFENOL is slowly emerging into the real world. While its magnetostriction is only 1/3rd to 1/4th that of Terfenol-D (the flagship of ETREMA's materials), it is a much more robust material allowing it to be used in mechanically harsh environments with minimal shock hardening.
AlN Piezoelectric Thin Films
Moving on to lead-free piezoelectrics, aluminium nitride (AlN) is a wide-bandgap material (Eg=6.2 eV) that exhibits a high electrical resistance, a high breakdown voltage, and low dielectric loss. It can be piezoelectric if it is well crystallized, which makes it a very attractive material for MEMS applications. Hence, AlN thin films are foreseen to be competitive for sensor, actuator, and ultrasonic applications.
At the EPFL in Lausanne AlN thin film growth mechanisms have been studied; the films are grown by reactive sputtering on amorphous, insulating silicon oxide thin films.

Cross-section of a 1.5μm AlN film between two metal electrodes. Source: CSEM
The National Nanotechnology Laboratory (NNL) in Italy has also done extensive work on the fabrication and characterization of AlN-based piezoelectric cantilevers, both as pressure/force or inertial sensors and as microactuators. The fabricated structures exploit a piezoelectric AlN thin film embedded between two molybdenum (Mo) electrodes which are deposited by DC magnetron sputtering on a polysilicon (PolySi) thin elastic layer. The operation of the cantilever as a microactuator has been investigated by atomic force microscopy (AFM) around the first resonance frequency and results have shown a vertical displacement of more than 16nm by the application of only 0.1V. At the Boston show, Professor Massimo De Vittorio and Maria Teresa Todaro will be discussing energy harvesting applications for AlN material systems and the work undertaken on the topic at the NNL.
For more attend Energy Harvesting & Storage conference Boston, MA on November 15-16, 2011.