Interviews with speakers at IDTechEx conference taking place in May

Less than 3 weeks remain before the 4th instalment of the IDTechEx European conference on energy harvesting, WSN and RTLS, taking place in Berlin on the 15th and 16th of May. Just before the event opens its doors to its attendees, Dr Harry Zervos, technology analyst with IDTechEx, interviewed some of the main speakers on their involvement with energy harvesting and wireless sensing and the reasons why their integration is becoming increasingly important in a wide range of applications. 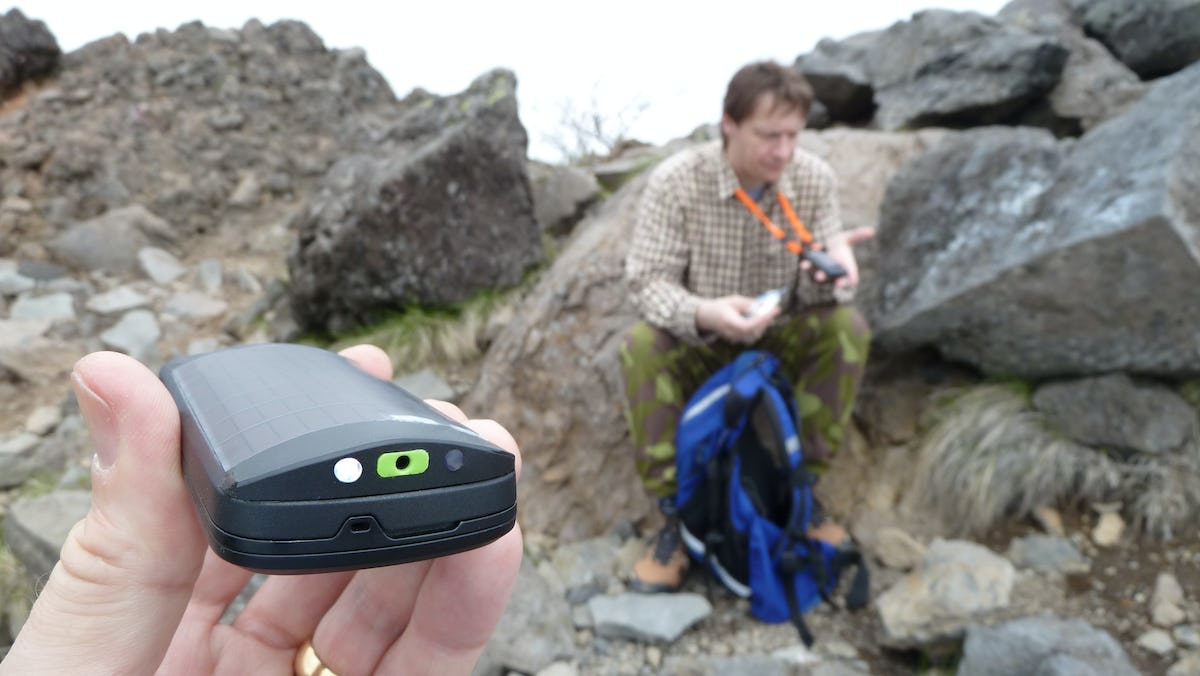 "Lokki" Nokia prototypes. Source: solarcharging.nokia.com
The main conclusion of this project was that a solar mobile phone's performance is affected by lifestyle, as users in very different parts of the world, ranging from the arctic to the equator, managed to keep the phones on standby for weeks at a time in most cases. From girl scouts testers to Nairobi security guards and sailors across the Baltic Sea, usage profiles varied dramatically. As can be seen from the graphs below, behaviour ranged from allowing the phone to constantly be on standby while sailing the Baltic, all the way to usage in standby and calling mode, under the bright sun of Nairobi in Kenya. 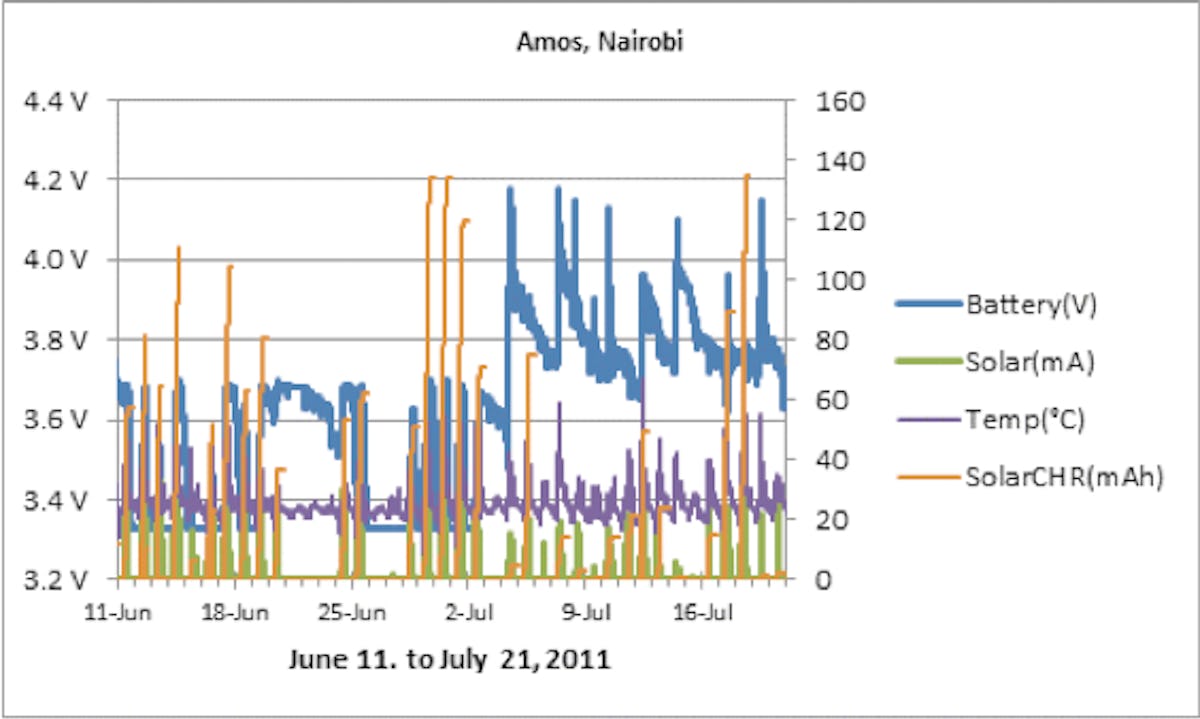 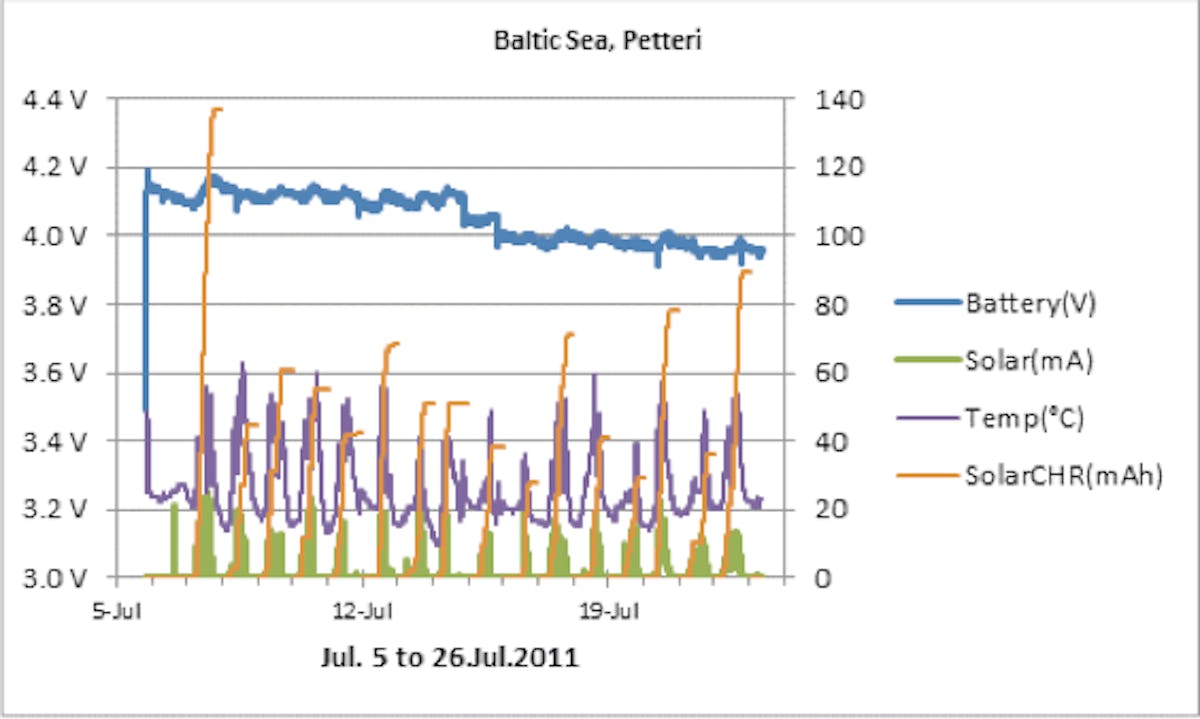 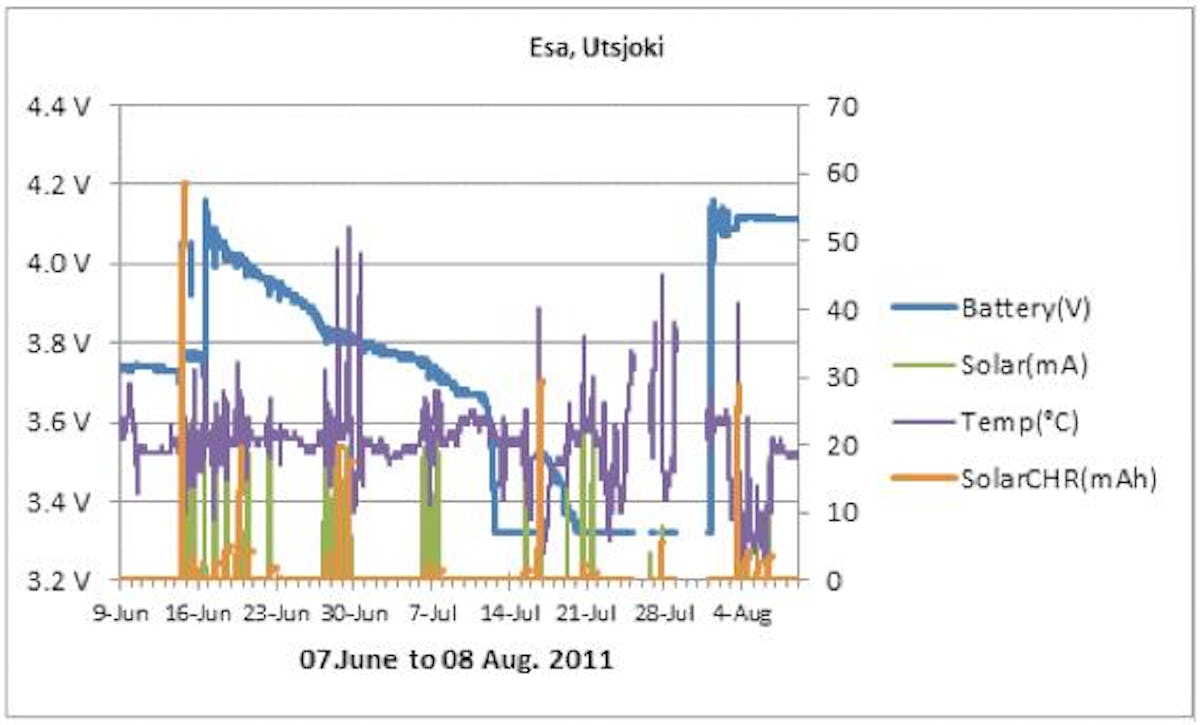 Different mobile phone utilization scenarios in different insolation conditions. Source: solarcharging.nokia.com
Matti Naskali, technology manager at Nokia, commented on the outcome of the project: "The main contributing factor to the limited functionality allowed by solar charging alone is the size of the phone, the small area available for solar cells. Users could have the phone on standby forever, but talk time was only a few minutes a day. As you can imagine, smart phones would be even more demanding".

Still in Scandinavia, but in the automotive space this time, Ms Mikaela Ohman, leading the team that is working on sensor technology at Volvo Technology had some very valuable input on the topic of integration of energy harvesting and wireless sensing in vehicles. "There's a range of challenges when deploying sensors in the automotive space" Mikaela said. "It's not a wireless sensor networks, this is a limited number of point to point, unidirectional sensors. The environment is also different; some sensors might experience temperatures up to 700-800 ⁰C, others heavy vibration or corrosive agents, fuel, etc."
But all these challenging operating environments can be turned on their heads and instead, offer opportunities for harvesting. "Thermal energy from combustion and braking, together with mechanical vibration are important sources of ambient energy which we could harvest" Mikaela concluded.
VOLVO is still in the evaluation stage when it comes to energy harvesting technologies. The main question, according to Ms Ohman is: "Where can we use it but also, what are the limitations? As an example, once the engine is off, there's no more supply of energy so, that means that sensors will be supplied with power intermittently." That necessitates the kind of approach that several harvester developers have adopted already, i.e. integrating a form of energy storage, a rechargeable battery or a supercapacitor.
But there are other limitations too. "Electrification leads to losing combustion as a source of energy. Hybrids are very quiet too, a lot of the energy available in conventional vehicles will not be available in electric ones" Mikaela points out. "But in the short term at least, electric vehicles will co-exist with conventional ones so, for the next couple of decades, this won't be an issue."
Discussing introduction of new components into VOLVO, product cycles are relatively long, around 4-5 years. On the other hand, that's not always the case. "Field tests are being looked into with VOLVO buses incorporating energy harvesting stop-buttons, an application that is not safety critical and hence, can be pushed forward much faster, 2-2.5 years maybe."

Roger Hazelden on the other hand, Technology Leader in Sensors and Optoelectronics with TRW Conekt, discussed much longer product cycles when interviewed by Dr Zervos. "TRW specializes in automotive safety systems such as steering, braking and airbags so any new technology must be thoroughly proven before we can use it in our products. "5-10 year product cycles for brand-new technologies are not unusual."
But energy harvesting incorporation in some automotive systems will not necessarily take such a long time. TRW has been a leading provider of tyre pressure monitoring systems for several years already. "Incorporating energy harvesters to our TPMSs could be considered mostly an incremental change", says Roger, "hence it might take a shorter period of time. For now though, the costs of harvesters are prohibitive so energy harvesting remains in our 'nice to have' list" he concludes.
TRW has a few aces up its sleeve when it comes to realizing energy harvesting commercialization in a timely, cost-effective manner.
For one, TRW's Switzerland business specializes in electroplating and electroforming, and is using this expertise to develop new, mass-production designs of thermoelectric harvesters, collaborating with local Universities. "This could expedite achieving lower harvester costs" Roger comments.
Another interesting approach TRW is taking is its involvement in the FP7 project "Smart-RRS", focusing on fixed installations of wireless sensors for road infrastructure monitoring, detecting hazards in the road, traffic jams, accidents etc. These are not true automotive systems as they are relating to infrastructure, but they would definitely benefit from energy harvesting and wireless sensing technologies and are seen as a new business opportunity for TRW.

On an entirely different topic, Philips is developing bright zero-energy e-skin technology, based on electrophoretics, while HP is basing its similar technology to electrokinetics. Kars-Michiel Lenssen talked to Harry Zervos and said: "We initially looked into e-reader applications but soon realised the multitude of applications such as e-wallpaper, smart windows, skins for consumer electronics, etc. A lot of these devices traditionally do not have wires, hence energy harvesting becomes interesting". 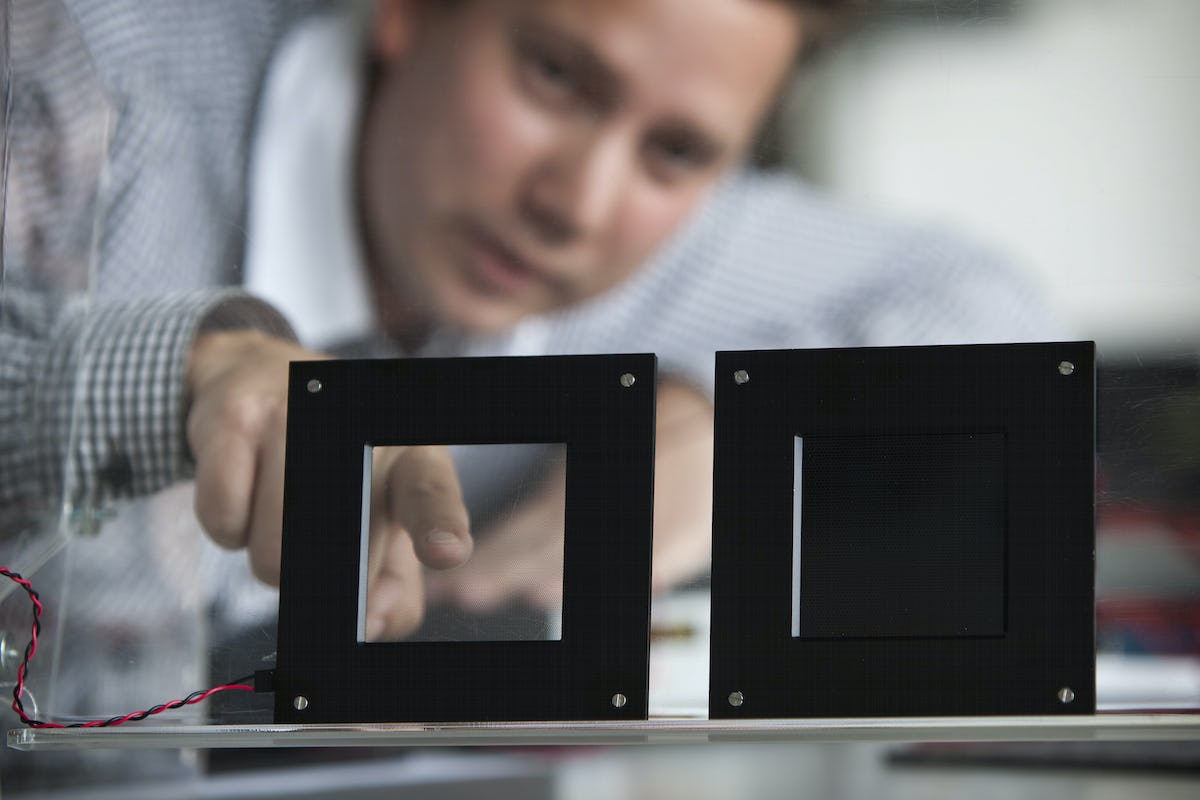 Philips e-Skin. Source: Philips
Demonstrators of low power e-skin powered by indoor optimized a-Si solar cells and RF harvesters have already been developed.
"Results have shown that an area of a solar cell equal to less than 1% of the area of e-skin you are trying to power is more than enough. In outdoor applications, the area of solar cell required could be even lower" said Kars-Michiel and he continued: "The RF powered e-skin, which required an RF source, an antenna and the e-skin panel for the demonstrator was characterized by a power consumption of 6mW in order to power 3.8sq.m." These low power requirements are due to the fact that e-skin requires zero power to maintain its dark state, nW/cm2 to maintain a transparent state and μW/cm2 to switch states. "With such low power requirements, in the future we can envisage GSM radiation being used to power these devices, amply available in most urban environments," concluded Kars-Michiel.
Let's not jump ahead of ourselves though. Still in the R&D stage, Philips Corporate Technologies is looking for commercialization partners, with several potential applications attracting the company's attention, such as ambience and scene setting, light management in buildings, even safety and consumer products applications. 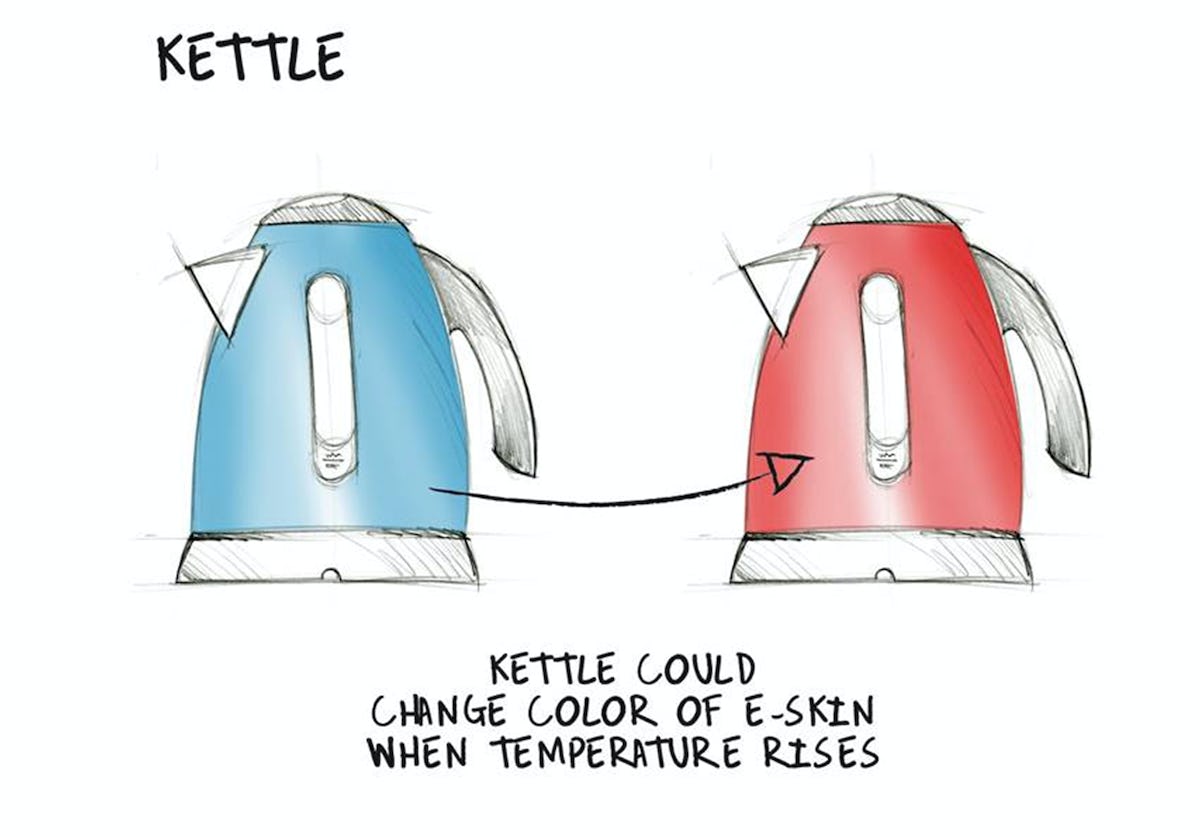 Example of application for e-skin technology in consumer products. Source: Philips
All these and many more topics and speakers will be part of the IDTechEx conference in Berlin, Germany on the 15th and 16th of May. For more information, please contact Corinne Jennings at c.jennings@IDTechEx.com or visit www.EnergyHarvestingEurope.com