With the Olympics underway, the whole world is looking to London and the excitement the Games are promising over the next couple of weeks. What sometimes goes unnoticed is the innovation that is ever present in the games, the limelight being stolen by exciting duels, explosive races and record breaking performances.
At the IDTechEx Energy Harvesting and Storage event, in Washington DC on the 7th and 8th of November 2012 (www.idtechex.com/ehUSA) the focus will shift away from the athletes for a change and look at the technology innovations that were made possible at the London Olympics. The Olympic Delivery Authority (ODA) will be one of the keynote speakers at the conference and will highlight the utilization of energy harvesting at the Olympic Park, using human footfall harvesting.

Adidas, British Cycling and the pair of heated trousers...

But other than the ambitious project of harvesting pedestrian power from a million pairs of feet to light the sustainable walkway to the London 2012 Olympic Park, another interesting example of innovation comes from the British cycling team, and its collaboration with Loughborough University and Adidas, that lead to the development of battery powered tracksuit trousers that bridge the gap between warm-up and competition, keeping the leg muscles at an optimum 38 degrees Celsius during the waiting period. Called ADIPOWER, they're said to perform a job similar to tyre warmers in Formula 1 racing, pre-heating the muscles in a bid to improve performance. The trousers have battery-powered heat filaments that sit over the cyclist's core muscle groups and maintain their temperature between warm-up and the start. They have a quick release too, which allows them to be removed at the last moment before a race. 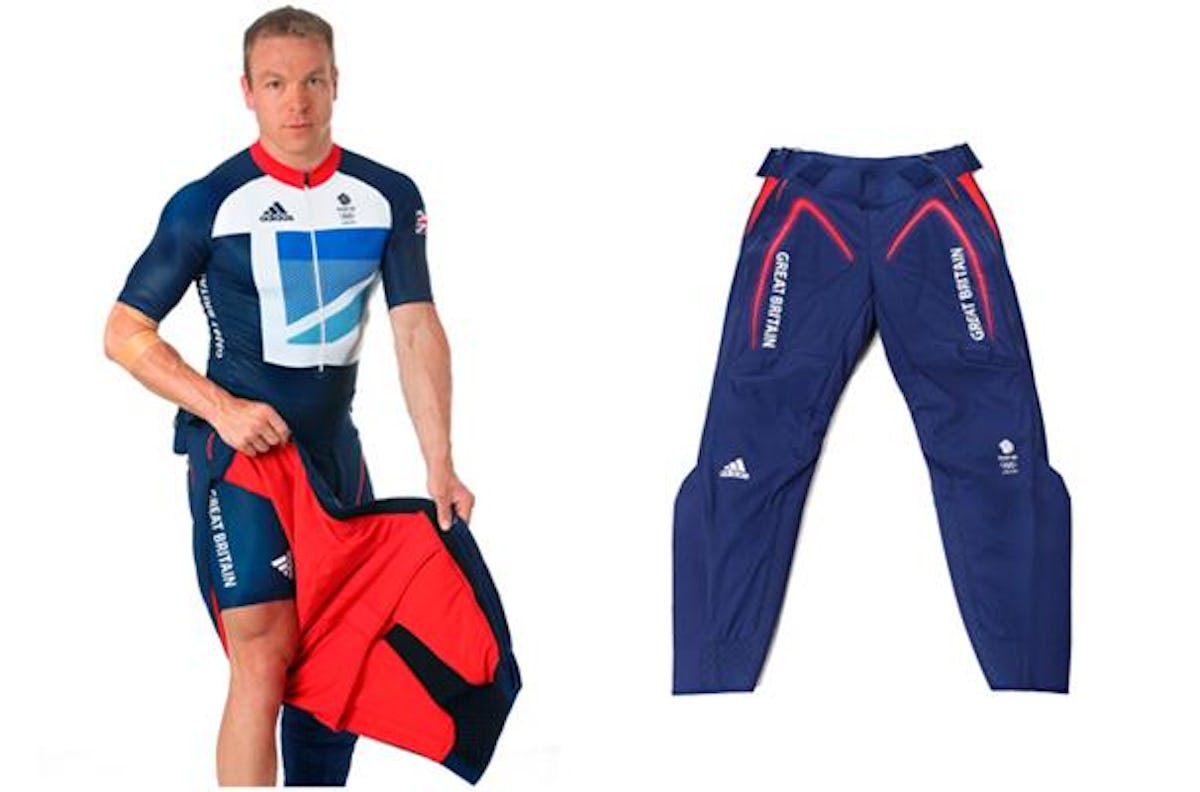 Adidas battery-powered heated tracksuit
This is just another example that proves that having been heavily interested in energy harvesting and storage and its integration into sports apparel for several years, Adidas remains at the forefront of innovation, always ready to embrace and utilize emerging technologies in order to achieve optimum performance for athletes, when they need it most.

On to footfall energy harvesting though and its integration into the Olympic park. Developed by Pavegen, the 12 installed floor tiles, powered by the feet of spectators, will be supplying the energy that will be used to power twelve LED spotlights illuminating the length of the walkway from West Ham station to the Olympic Park, providing full power for eight hours at night but also for 16 daylight hours at half power.
When stepped on, the tiles flex by 5mm converting kinetic energy into a useful electrical output. Based on an average of six watts per footstep at an expected 12 million footsteps, the tiles will generate 20 kilowatt- hours (kWh) or 72 million joules of energy during the Games. 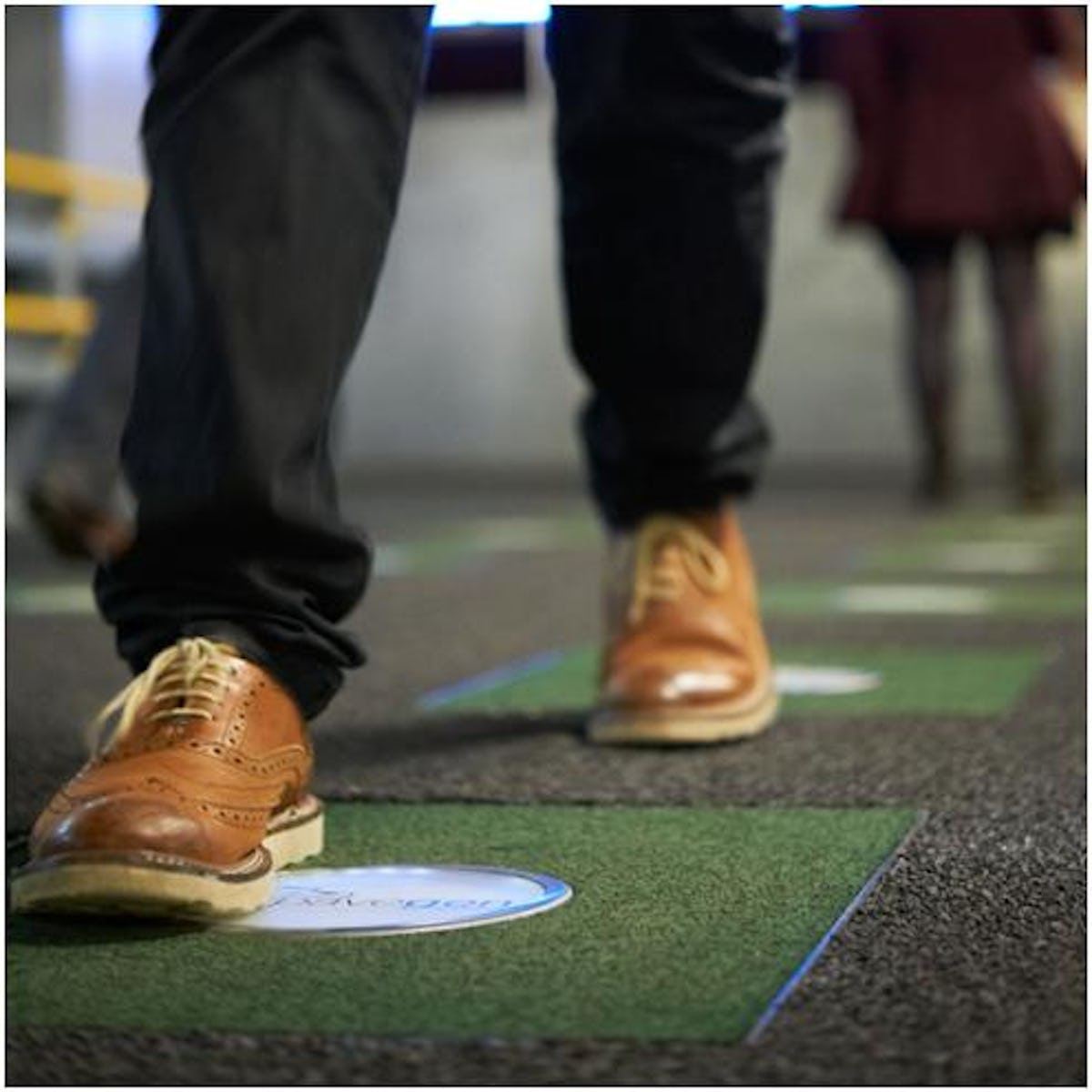 Pavegen's Sustainable Walkway at West Ham Station, heading to the Olympic Park
Speaking at Energy Harvesting and Storage USA, Mostyn Woodhouse, technical manager with the ODA was formerly the design manager that led the engineering design of the temporary capacity enhancement works at West Ham station of the London Underground. Under this assignment he was able to integrate and implement an emerging technology such as footfall energy harvesting as a demonstration project that will in future lead to permanent installations in highly trafficked concourses. A civil engineer he specialises in the design and construction of multi-disciplinary works on London Underground and other rail systems.
For more information on the development from prototypes to an installed product, challenges and constraints around UK rail regulation and of course details of the installation's performance in operation, don't miss the opportunity to attend Energy Harvesting and Storage USA in November this year. Please visit www.idtechex.com/ehUSA or contact Mrs Corinne Jennings at c.jennings@idtechex.com
Top image source: Olympic Delivery Authority
For more read Energy Harvesting and Storage for Electronic Devices 2012-2022
And attend Energy Harvesting & Storage USA 7-8 November 2012 Washington DC, USA

Based on values given in the article the average weight of the walker should be about 245 kg without considering mechanical and electrical losses? Sounds quite a lot for me...