Piezoelectric energy harvesting is the process by which ambient mechanical energy such as stress, strain and vibration is converted into electricity by a piezoelectric material. Application uses range widely from harvesting energy from vibrations in vehicles to power sensors to using energy from pedestrian traffic to power localized lighting. Many suppliers of piezoeletrics for conventional applications such as sensors or sound generation are now leveraging their know-how and using piezoelectrics to create energy, opening up a large new opportunity for them.

IDTechEx find that the money spent on piezoelectric energy harvesting investments will grow to $145 million in 2018. Thereafter, it will create a $667 million market by 2022. The number of units will rise from 100 million this year - predominately used in cigarette lighters - to 300 million units in 2022. These will be at a higher average price point compared to those used today because the versions used to power wireless sensors and portable electronics are more sophisticated than the version used on lighters.
Piezoelectric Market Forecasts for 2018 and 2022 (partial data from IDTechEx research) 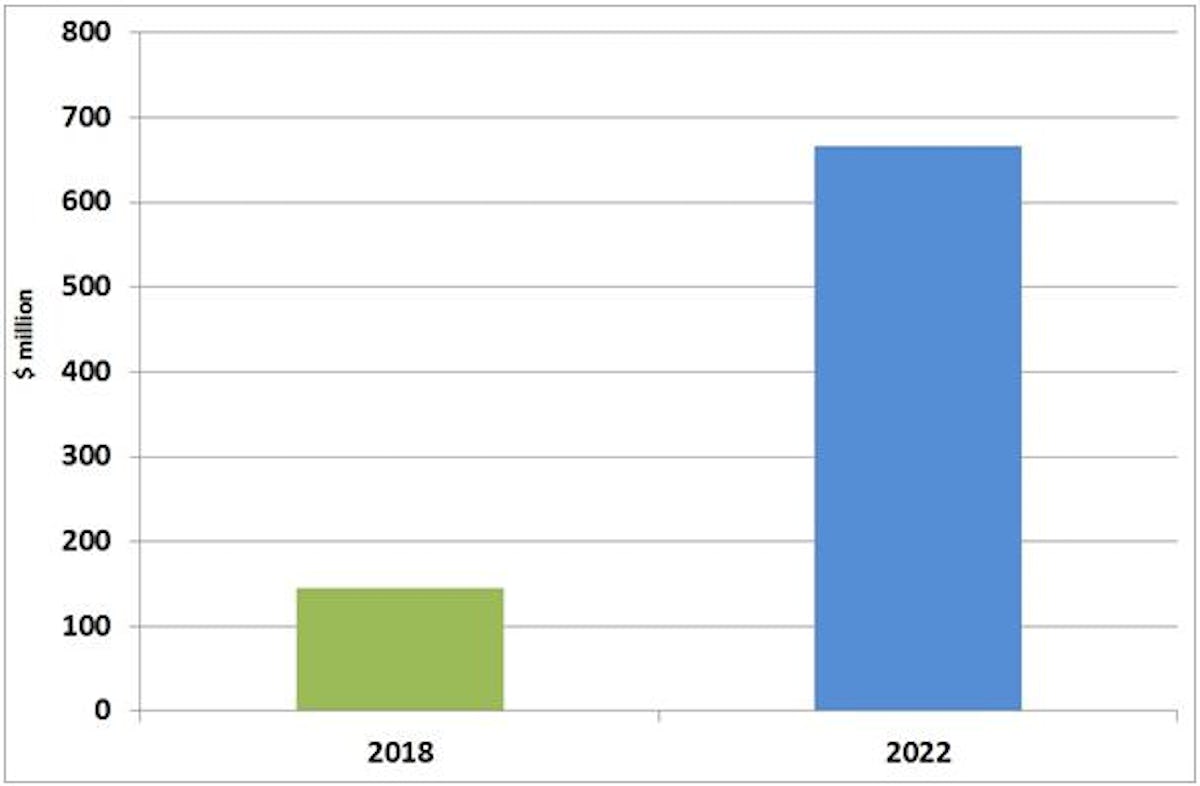 Large range of piezoelectric material options - which are best?

There are over 200 piezoelectric materials that could be used for energy harvesting, with the appropriate ones being selected for each application. The traditional inorganic lead zirconate titanate PZT ceramic is still the most commonly used material for piezoelectric harvesting but many alternatives are receiving some attention, usually where efficiency and temperature performance of the material itself is not the primary consideration but factors such as flexibility and light weight come to the fore. For instance, there are organic piezoelectrics such as polyvinylidene difluoride. Piezoelectric energy harvesters are currently being developed by many companies, and this IDTechEx report (www.IDTechEx.com/piezo) profiles 29 organizations.

Piezoelectric energy harvesters provide an AC output and therefore the interfacing electronics requires rectification, and step up/down electronics. A challenge of piezoelectrics is that while they are efficient at optimal resonance, only a slight variation away from the optimal resonance causes a significant reduction in energy generation - the bell curve is very steep. Some try to compensate for this by using magnets to limit the vibrations within the main resonance of the device, which adds bulk and cost and does not enable true broadband ability. Other solutions offered are to electronically pre-bias the piezo electric material. A charge put on the material acts as a damper and requires the material to do more work against it. As a result, they have shown a power gain up to 20 times compared to an optimal resistive load.
Another challenge with piezoelectrics is that outside of the optimal resonance they can break relatively easily. Unless this is controlled by dampening or pre-biasing it can lead to rapid failure. Indeed, one of the most successful companies in energy harvesting, EnOcean, began by developing piezoelectric energy harvesting light switches, but due to the failure rate moved to electrodynamic energy harvesters. Others now are improving on those failure points and this report covers the latest progress, products and market outlook.

This new report from IDTechEx covers the wide range of materials and form factors, from MEMs, to paint and spray versions, to ribbons and nanowires. It profiles the latest work commercially and academically. The report provides forecasts for piezoelectric energy harvesters for the following application segments over the next ten years, with year by year figures. For each, it gives the number of energy harvesting units forecast to be bought, average sales price and the total spend in US $.
In particular, this report covers:
For more information on any of IDTechEx's reports please contact Alison Lewis at a.lewis@IDTechEx.com
For more read Energy Harvesting and Storage for Electronic Devices 2012-2022
And attend Energy Harvesting & Storage USA 7-8 November 2012 Washington DC, USA