IDTechEx technology analyst Harry Zervos recently followed up on the interview he had with Dr Markys Cain, from the National Physical Laboratory (NPL) last year, picking up the latest updates on the project on Metrology for Energy Harvesting that NPL is involved with. Talking with Dr Paul Weaver from NPL and Dr Torsten Funck from the Physikalisch-Technische Bundesanstalt (PTB), the researchers updated IDTechEx on their involvement with the European Metrology Research Program (EMRP), supported by funds from the E.U. framework 7 programme and from EURAMET (European Association of National Metrology Institutes).

"One of the most interesting developments over the past year has been the publication of a paper in Applied Physics Letters discussing losses in piezoelectric cantilevers, a topic of great interest in micro-scale electronics applications" said Dr Paul Weaver. In this paper, it was demonstrated that re-distribution of charge within the piezoelectric leads to losses that can be as high as 25% of the potential generated power (Charge flows from the highly strained root of the cantilever to the unstrained tip, and energy is lost in this process, reducing the effectiveness of the harvester). Reducing the area coverage of the piezoelectric was shown to significantly improve cantilever power output, with the optimum coverage being 2/3 of the beam length from the root.

The research work undertaken at PTB on the other hand is more focused on energy measurement rather than materials. Dr Torsten Funck discussed how PTB's work is mainly related to the efficiency between mechanical input and electrical output in piezoelectric harvesters. "In reality, maximizing output is more important than efficiency as, input energy is basically free" said Dr Funck characteristically.
On the topic of thermoelectric harvesting, measurement traceability is being addressed, with efforts being directed towards simultaneous measurements of thermal and electrical conductivity. Similarly, problems of traceability in non-sinusoidal signals, pulses and oscillations are also being tackled.

Concluding the interview, Dr Weaver highlighted some more results from the collaboration of the members of the consortium, such as the development of a vibrational source for a Laser Doppler Vibrometer and the work to integrate the MEMS-based vibration source in it, the work on electrostatic energy harvesters with LNE (the French National Metrology Institute) and INRIM's (the Italian National Metrology Institute) work on magnetostriction. 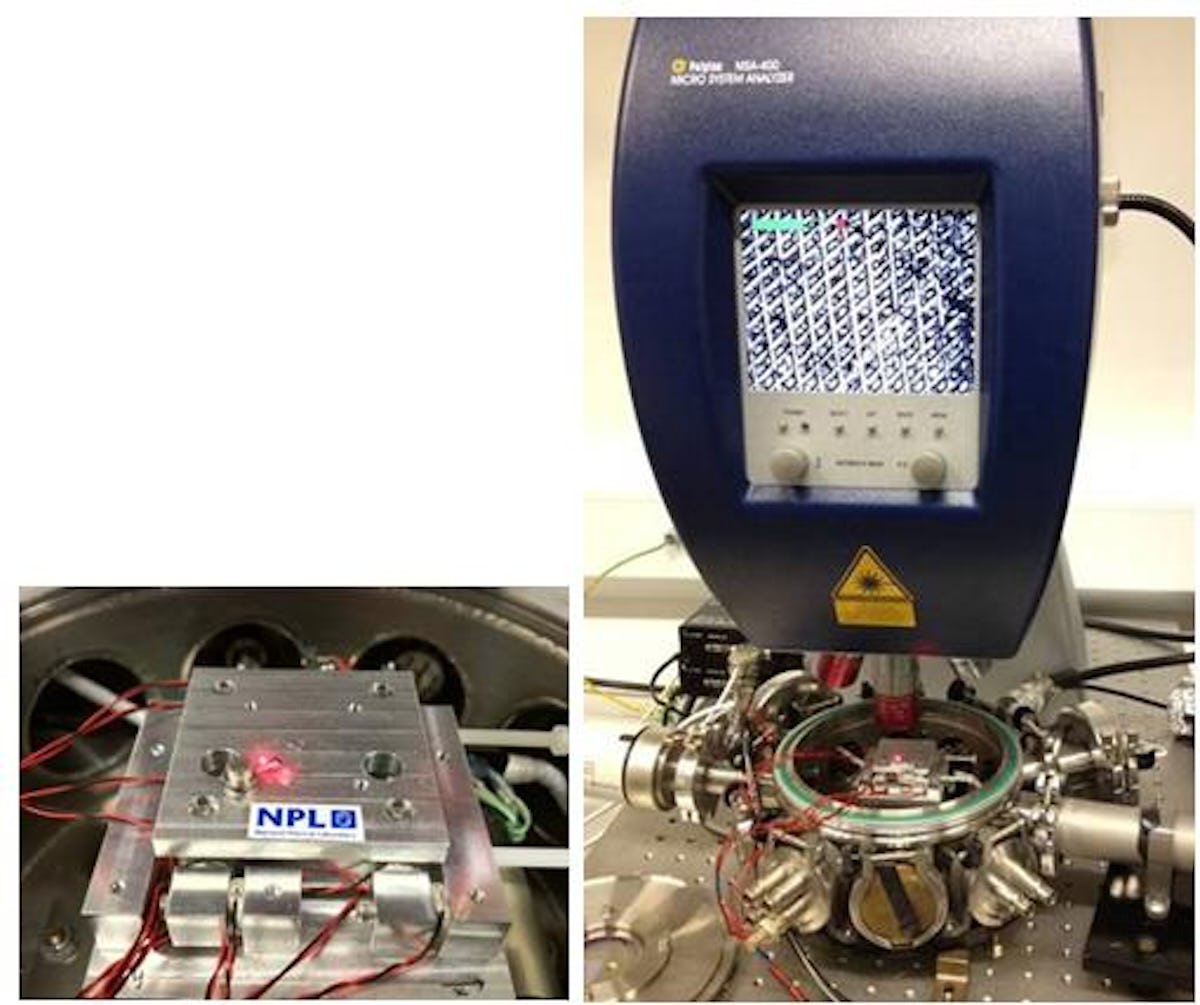 NPL's miniaturised vibration source built into the Laser Doppler Vibrometer facility for the measurement of MEMS scale energy harvesters
"Together with conference presentations and workshops to disseminate the consortium's results, the underlying effort over the remaining year will be to work closely with industry and the participating labs and institutes, to apply the metrology developed in the project, compare results and make sure they are consistent" concluded Dr Weaver.
For more information on EMRP, please visit http://www.euramet.org
For further information on the project, please visit - www.npl.co.uk/emrp-metrology-for-energy-harvesting.blogspot.com/
For more read Energy Harvesting and Storage for Electronic Devices 2012-2022
And attend Energy Harvesting & Storage USA 7-8 November 2012 Washington DC, USA