This IDTechEx conference just finished in Berlin had a wide variety of future oriented presentations. Winnified Noorlander of Nuon Solar Team gave a riveting presentation on their remarkable winning of seven out of nine of the recent Bridgestone Solar Challenge races across Australia on sunshine alone.

Their parent organisation has already spun off five companies and there is more to come. The statistics are remarkable. Air resistance of the whole car is the same as that of one car mirror! It is 150Kg plus an 80 kg driver. Partly restrained by the rules, they use single crystal silicon from Sun Power, something the Solar Impulse plane uses and the Immortus "perpetual" solar car will also use. 10 kWh lithium-ion phosphate battery. 400km at night.
Every year a new car has new innovation. They designed and sourced a 3D printed a sharp trailing edge that gave a meaningful advantage last year. Concentrators were used once in the past and now they have a prism system that may be commercialised.
Chemicals giant Sabic spoke on the use of polycarbonate as windows in vehicles giving a 50% weight advantage and big thermal insulation advantage leading to significant range increase. It also permits integration of spoiler and other features in single mouldings and a coating gives it scratch resistance, other coatings ink jetted giving electrical defrost etc. Fogging is inherently less than for glass. Transparent photovoltaics coating is envisaged. 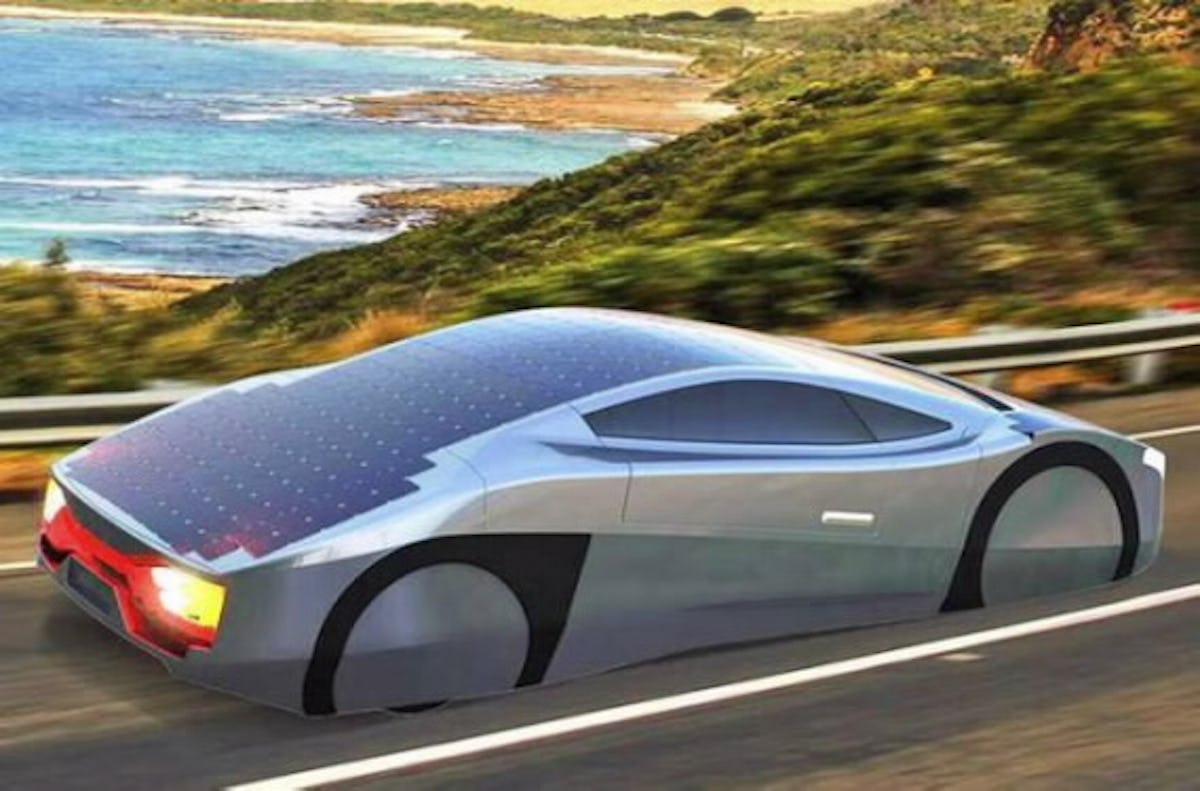 EVX Ventures of Australia described their Immortus solar sports car concept. They are fund raising for manufacturing these ultra lightweighted $1 million supercars for collectors. It is anticipated that many businesses and licenses will be created from the IP. 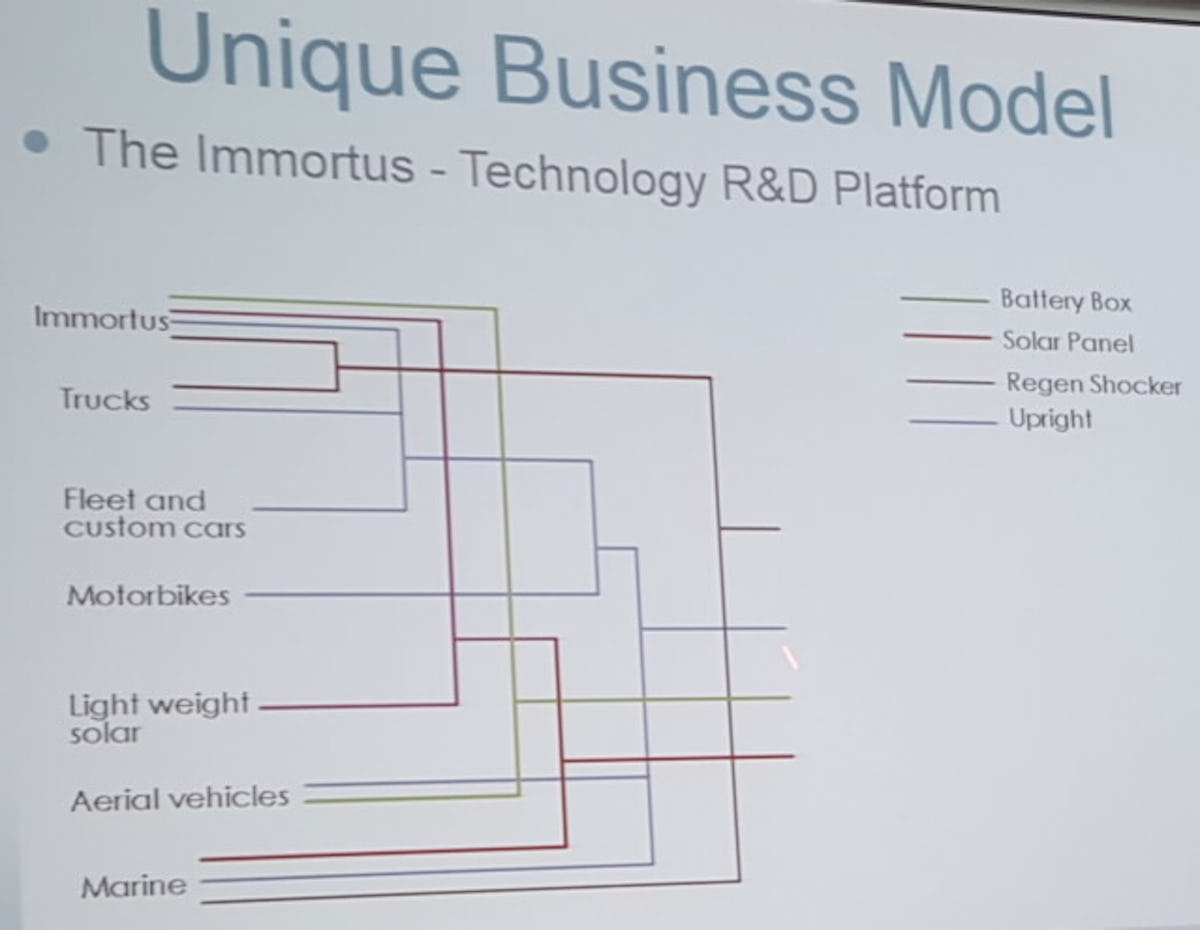 Primitive dynamo energy harvesting heavier shock absorbers are planned and they also have patents on solar integration. Even with premium pricing they cannot afford GaAs photovoltaics other than in one demonstrator possibly. There is seven square meters of Sun Power single crystal silicon solar weighing only 103 grams. The Immortals has been designed to be exceptionally simple to assemble. Abandoning early concepts that used a carbon-fibre monocoque frame with two large tubs, the most recent design features an ultra-lightweight space frame using off-the-shelf carbon fiber tubing, with 3D-printed nodes to connect the tubes. The frame of the car is effectively like a big Meccano set.
"This simplifies the manufacturing process, as well as reducing transport costs," says technical lead Clint Steele. "The plan is to have these cars assembled by custom car builders close to wherever the customer is. The custom shops can source their own carbon fiber tubing, and we can either send over the 3D-printed node parts or send over the designs so they can print them locally."
EVX doesn't expect to sell more than 100 of the Immortus. At an estimated AUD$500,000 (approx. US$370,000) depending on spec, it's a boutique, high priced technology platform that will only appeal to extremely wealthy early adopters. But the ideas developed through the Immortus project are filtering out into a range of other projects that are much more consumer focused. EVX is looking to raise about US$1.5 million dollars to get the Immortus production ready,
The Immortus is based on solar race car technology with the project originally founded by Australia's Aurora Solar Car Team, which has competed in a bunch of solar race events across the world. Hence the light weight and the shape of the Immortus, which combines maximal sun exposure with extreme aerodynamics, including covered wheels. Unlike the solar racers, it is designed to approach practicality on the road, with a 0-100 km/h (62 mph) time that will be less than seven seconds and a top speed over 150 km/h (93 mph). It is a two-seater with a modest luggage capacity for daily driving. Melbourne-based EVX Ventures, creators of the Immortus, list fun as a priority, saying it should handle like a well-balanced sports car.
10 kWh lithium-ion phosphate battery. 400km at night. Twin DC motors mounted on the uprights leading to each rear wheel hub, each with a peak output of 20 kW, for a total peak output of 40 kW (53.6 hp). Low rolling resistance wheels. A feather-light weight of around 550 kg (1,212 lb) gives the Immortus a power-to-weight ratio and acceleration time similar to a Mazda MX5 (aka Miata).
Top image: TU Delft