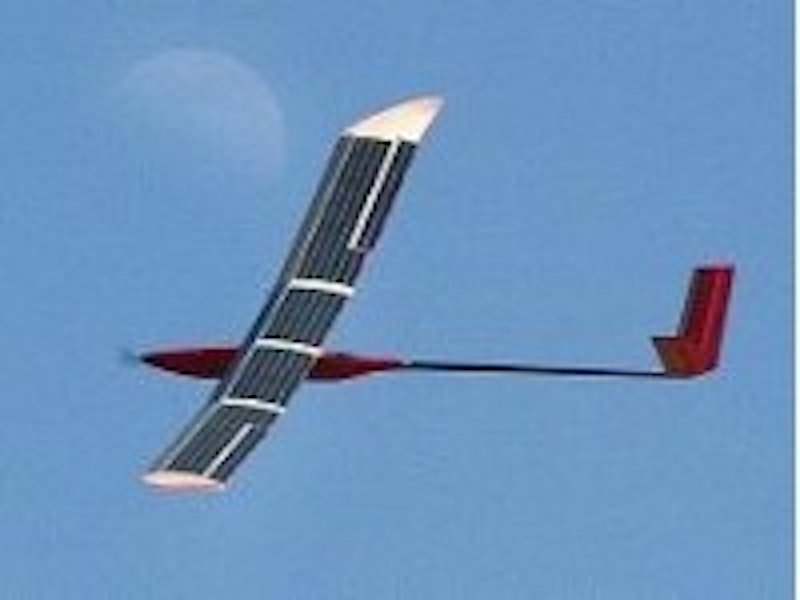 The Swiss Institute of Technology in Zurich (ETH) has demonstrated continuous flight using only solar energy during a solar powered flight of more than 27 hours over 874.4 km, the equivalent of a Zürich-London trip. This represents a world record for this size and using no thermal winds or altitude gain before the night.
This project began in 2004 under a contract with European Space Agency to study the feasibility of a Martian Solar Airplane, the goal of the project being the designing and building a solar powered micro airplane for autonomous exploration. The system, named Sky-Sailor, is fully autonomous in navigation and power generation with solar cells covering its wings to retrieve energy from the sun to supply power to the propulsion system and the control electronics. The battery is charged with the surplus of energy. During the night, the only energy available comes from the battery, which discharges slowly until the next morning when a new cycle starts.
The plane weighs 2.4kg and has a wingspan of 3.2m. Because weight has a major impact on the required power for leveled flight the plane uses thin silicon cells which are lighter than GaAs Triple Junction cells which would have been the preferred option because of their higher efficiency. A total of 216 solar cells were installed on the wings of the demonstrator plane, providing a maximum of 90w of power. The cells were encapsulated using a flexible, mechanically favorable symmetrical laminate combined with a fiber glass reinforced plastic coating which is connected to the power circuit. This encapsulation is non-reflective so that all the sun's energy is used rather than having some reflected off. Excess energy is stored in a Lithium-Ion battery which is mainly required during the night flight.
In June 2008, the airplane took off from Switzerland at 12.33hrs. During the afternoon, the half square meter of solar cells gave enough energy to power the motor and at the same time completely charge the battery whilst flying 200m above ground. During the night phase the battery slowly discharged to continue powering the plane until in the early morning the solar panels started progressively to supply power.
Mars exploration
For the anticipated flight around Mars the plane's speed is expected to be around 40 meters per second with a distance covered of approximately 1700 km during a 12-hour period. In order for the solar panels to collect the maximum amount of sunlight the plane would fly at a nominal height of about 1 to 2 km from the Martian surface. It is hoped that the plane will provide high-resolution imagery of Mars's surface.
The objective of flying for 24hours using only solar energy was achieved in 2005 in California by the 4.75 meters wingspan Solong airplane that used not only solar panels for energy but also warm updrafts to gain altitude. In 2007, the 18 meters British prototype Zephyr also showed continuous flight at high altitude in New Mexico. Sky-Sailor is the first to demonstrate this ability with a wingspan of less than 4 meters at a constant altitude.
Top Image: Sky-Sailor. Source: ETH
For more attend: Energy Harvesting and Storage Europe 2009
Also read: Energy Harvesting and Storage for Electronic Devices 2009-2019