Maxim Integrated Products makes highly integrated analog and mixed-signal semiconductors. With 11 wafer fabs and test facilities, 37 technology design centres, and revenues of $1.92 billion in fiscal year 2010, Maxim is a fast growing semiconductor company. IDTechEx analyst Dr. Harry Zervos interviewed Jason Wortham, Senior Scientist with Maxim and got some more insight into the company's involvement in the energy harvesting space.
"Maxim has developed a power management chip for energy harvesting applications", says Jason, "The MAX17710 is capable of handling both the multi-source energy harvesting side as well as supporting the load side."

The MAX17710 is a complete system for charging and protecting micropower-storage cells such as Infinite Power Solution's THINERGY® microenergy cells (MECs). It is an integrated power-management IC for both energy storage and load management. The MAX17710 can manage poorly regulated sources such as energy-harvesting devices with output levels ranging from 1µW to 100mW. The device also includes a boost regulator circuit for charging the cell from a source as low as 0.75V (typically). An internal regulator protects the cell from overcharging. The MAX17710 is available in an ultra-thin, 3mm x 3mm x 0.5mm 12-pin Ultra TDFN package.
"Quiescent current is key in this case and we have completely minimized it, reaching a level of 1nA in standby mode." 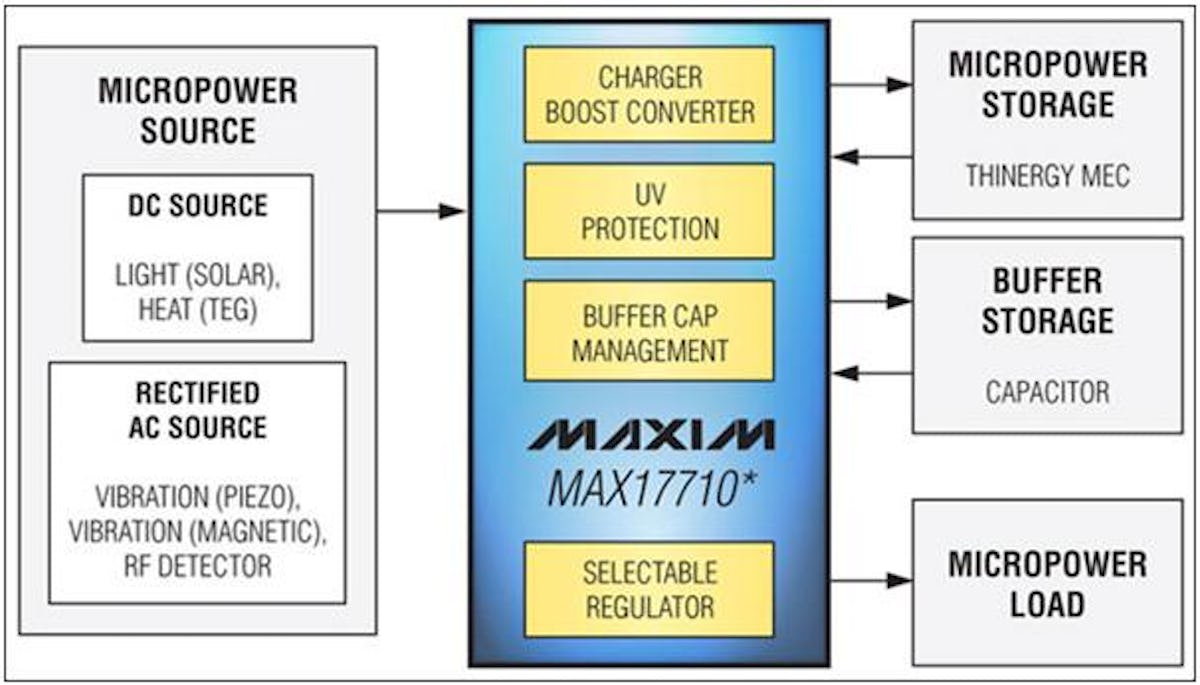 When asked about the growing interest in energy harvesting in recent years, Jason pointed out the convergence of several factors that contributed to the increase of the sector's visibility: the appearance of microbatteries, better power management, and a decrease in microcontroller power consumption.
"On the other hand, the market hasn't crystallized to the point at which any single, large application for this technology is dominant" Jason said. "Maxim has been engaged with many applications. Virtually any application with power levels around those of ZigBee® or Bluetooth® technology is an opportunity for energy harvesting".
When asked about the potential penetration of energy harvesting into conventional electronics Jason pointed out the possibility of a "perpetual e-reader". "Adding solar energy harvesting on an e-reader could lead to a tenfold reduction of battery size, leading to a much thinner device, allowing for new potential form factors."
"In the next few years, we would only be expecting energy harvesting in many niche applications, such as wireless sensor nodes, smart cards, and active RFID. It's natural that the energy harvesting market will emerge from lower power level electronics."
To find out more about Maxim, visit the company on their website at www.maxim-ic.com