Governments in Asia have been strongly advocating RFID in all its forms - from passive RFID tags to tags with a battery or energy harvester that can be used to create Wireless Sensor Networks (WSN), including mesh networks.

China will eventually become the biggest market for RFID. Indicators of this are as follows: In the last two years most new RFID manufacture capacity has been installed in China; the Chinese Government is a strong advocate for RFID, and has the power to mandate companies to use it. China has already executed the largest RFID order by value (over one billion national identification cards for adults - six billion US dollars including systems) and has a policy of making its own requirements throughout the RFID value chain. Most products will be source tagged, and because China is one of the largest exporters the tags will be supplied there.
Many companies in the West are manufacturing passive tags in Asia today. In addition, Chinese companies such as Invengo are now successful global providers of RFID hardware. That is why IDTechEx is holding its Asian RFID event in Hong Kong, at the centre of all of this activity, with speakers from organizations such as the Peking University, Adidas and the Logistics and Supply Chain Management (LSCM) group in Hong Kong.
The value of the total RFID market for 2011, 2016 and 2021 is shown below, in US$ Billions. 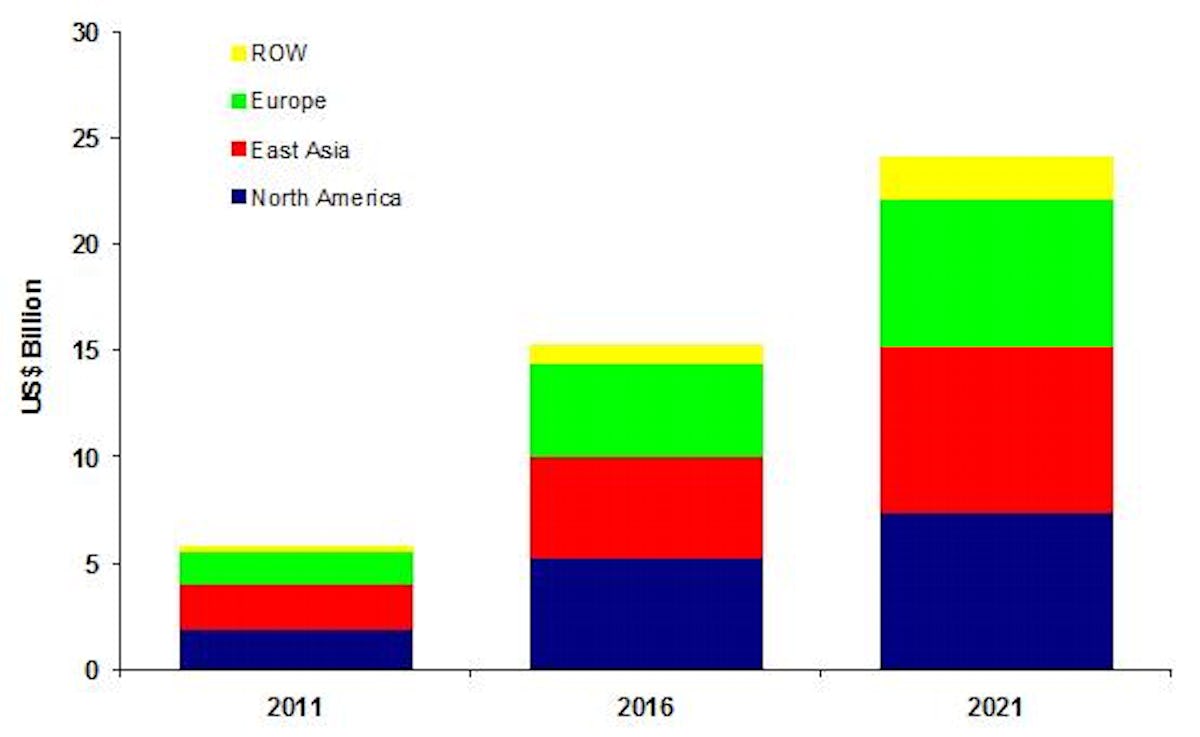 Tags with batteries - known as Active RFID - are used for longer read range applications and where more functionality is required, such as multiple sensor inputs. The fastest areas of growth are Real Time Locating Systems (RTLS) and Wireless Sensor Networks (WSN). The USA is most active, followed by Korea. Only Korea has a nationally coordinated program directed at the future of WSN. East Asia will become a more important territory for WSN in the years to come, with Japan and Hong Kong using wireless sensors today to monitor pollution from traffic.
For mesh (self-organizing, self-healing) networks alone, applications have started with humble killer applications such as meter reading in buildings, growing to include automatically anticipating and monitoring forest fires, avalanches, hurricanes, failure of country wide utility equipment, traffic, hospitals and much more over wide areas. The market for this alone will grow rapidly from $0.48 billion in 2010 to $2.75 billion in 2020. Companies such as EnOcean and Dust Networks will present case studies and the huge savings that have been made by deploying wireless sensors.

In cases where wireless sensors have not proceeded from trials to rollouts, 90% of the time the issue is the battery life. The return on investment calculation does not often stack up where companies have to replace the batteries in wireless sensors every few years. Usually, the greater part of this cost is the manual effort to replace the battery, rather than the battery itself, and for deployments of hundreds of thousands of sensors or more per location it becomes unfeasible. This is where Energy Harvesting comes in - small devices that take energy from the environment to power small electronic and electric devices.
Many devices such as pollution sensors and even road signage lighting are already today powered by solar cells. However, new energy harvesters can power devices from heat sources, vibration, other forms of movement and more. Applications go beyond wireless sensors - East Asian companies are using energy harvesters for toys, apparel, wristwatches, garden furniture (e.g. water jets), tire pressure monitoring and much more.
Over recent years China has crept up to become the world's largest manufacturer of photovoltaics resulting in conventional silicon PV prices tumbling. There is great interest in other forms of thin film PV which can see costs fall further or enable new markets through new form factors such as semi-transparency and flexibility.
This IDTechEx event features companies discussing appropriate developments from such energy harvesters - such as Humdinger utilizing air flow to power pollution sensors, ASTRI discussing how their piezoelectric energy harvesters can be used to power tire pressure sensors, with other presenters including the Chinese University of Hong Kong and Sinoceramics.

Why you should attend

The combined IDTechEx event Wireless Sensor Networks, Energy Harvesting and RFID Asia brings all of these topics together for you. Held on 13-14 October in Hong Kong, it builds on the extensive research IDTechEx has conducted in Asia over the last ten years. It puts you at the heart of the activity and gives you access to the major developers.
Those supplying RFID, wireless sensors, batteries, energy harvesters, storage technologies and systems can benefit from understanding how to penetrate this territory at a stage when things are beginning to ramp up. The event is geared towards introducing you to the main companies working in this topic and through the many presentations providing you with the latest progress. End user perspectives are given from companies such as Adidas.
Attendees can access our proprietary online networking system to add introductions and will also receive the IDTechEx report "Active RFID and Sensor Networks" (worth US$2,795), covering more than 100 companies and 75 case studies. The money spent on attending will be small compared to the investment needed for you to research progress in the territory, giving you exclusive insight and competitiveness.
For more information see www.IDTechEx.com/ehasia
For more read : Energy Harvesting and Storage for Electronic Devices 2010-2020
and attend Wireless Sensor Networks, Energy Harvesting and RFID in Asia
Energy Harvesting & Storage and Wireless Networks & RTLS USA 2010